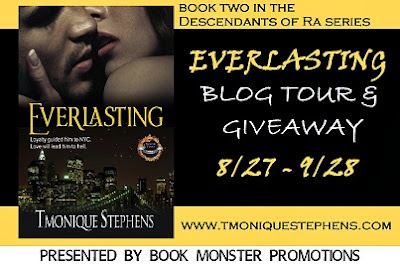 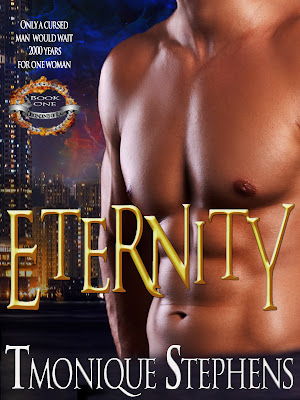 Cursed for 2000 years, Roman Nicolis has tracked his lovers’ soul through each reincarnation only to lose her horribly every time. Reclaiming their love is his only salvation. He’s been her friend, her father, her neighbor, but never again her lover . . . until now.
A late night walk home throws Stella Walker into the path of a killer. The last thing she remembers are the deep blue eyes of the man trying to kill her—and the first things she sees after a seven day coma are the same blue eyes in the handsome face of the man hired to protect her. Is he truly the owner of a security firm or the man who wants to finish her off? Is it fears she feels when Roman touches her or the memory of something sweeter?
Past secrets haunt them. An angry demon stalks them.
Roman will do anything to recover what they once had. Though Stella’s ruined childhood has made her close her heart and body to any man, he must get past the walls around her to gain her love and trust, for it will take their union to defeat an unexpected enemy sent from the Egyptian Gods. A man Romans respects, and Stella trusts.

TWO HEARTS.ONE SOUL. FOR ALL ETERNITY. 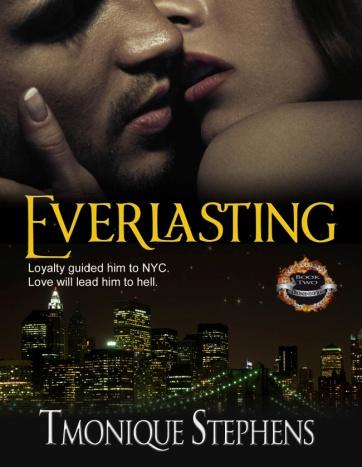 Kill the beast.
Save your brother.
Win your freedom.
No problem.
Falling in love with the cop trying arrest you?
Problem.
To save his twin from death, Reign Nicolis will have to bargain with Goddess of the Dead, and once more become what he despises, El Mortem, The Scourge, a killer trained to show mercy to none. But he is haunted by those who have fallen beneath his blade. Their ghostly shapes dog his footsteps, relentless in their torture to make him suffer for what he was put on this earth to do two thousand years ago. Saving his twin ensures Reign’s enslavement to the Goddess. She may own his body, but never his heart.
Detective Alexis Lever’s career is in shambles. Her only chance at redemption is to discover what happened to the body of Daniel Nicolis. To do that she’ll have to thwart two men: Reign Nicolis and Roman Nicolis. Both belong in jail. But one has stolen her heart.

ABOUT THE AUTHOR
Tmonique Stephens wrote her first novel about a reporter and a hockey player after the U.S. hockey team won gold in the 1980 Olympics. She loves writing flawed characters who reflect the emotional baggage we all carry. She writes complicated stories for complicated people. Paranormal romances and fantasy novels are her favorite genre. She will read anything about fairies, demons, or angels. She also enjoys Stephen King and Dean Koontz.
She has a Bachelor’s Degree in Creative Writing from City College of New York where she won an English Department Award for her play Tea with Salt in 1987.
She was born in St. Thomas USVI, but she grew up in The Bronx, New York one mile from Yankee Stadium. She loves SyFy and the History channels, and Asian cuisine. But her heart and stomach longs for anything from the Caribbean.
Facebook | Twitter | Pinterest | Email: Tmoniquebooks@gmail.com


Trailing behind the police car, Alexis couldn’t keep her gaze off the back of his head and broad shoulders. Every single thing about him embodied the fantasy lover she’d created, then forgotten and remembered again just days ago. She had dreamed of his naked body covering hers, wrapping her legs around him, and begging him to take her.
Somehow, he shifted his big body around and stared at her from the caged back seat, as if he knew where her thoughts strayed. A shiver raced down her spine. Heat pooled low in her groin and released in a whiplash of pleasure. She clenched the wheel with suddenly sweaty palms and tried to hold onto the tendril, all the while his gaze remained locked on hers. “Thank God,” she sighed when they pulled into the police station parking lot.
It seemed the entire police station had stopped to stare at the new arrival. She couldn’t fault the women for gawking or the men for unconsciously touching their weapons. Immense and overwhelming, he stood at least six foot eight with shoulders as wide as a linebacker with the pads. Black cotton stretched tight over massive shoulders and molded to perfect pecs and brick abs. Even stretched behind his back, his biceps bulged. When contracted, they’d probably peak like mini Mount Everest. His eyes, electric blue, peered through his shaggy midnight hair, watching her approach.
Palpable menace seeped from his pores, polluted the air, and set everyone’s nerves on edge. The man was a killer. He wouldn’t wax poetic like a comic book villain. No, he’d kill you and move on to the next combatant before your body hit the ground.
Her heart suddenly ached. The embodiment of the man she dreamed about most of her life now stood before her and he was probably a criminal. And for some weird reason, she cared. Her life had plopped into the crapper yet she cared about a criminal she had met fifteen minutes ago.
Then he pivoted that body so she got a full frontal and whipped his hair back with a snap of his neck. Alexis sucked in a sharp breath. That face. There was nothing pretty about him or even handsome. He demolished her senses like a freight train smashing into a two seater. He was almost too much to look at, yet she couldn’t turn away. She didn’t dare.
Exhaling slowly, Alexis didn’t back down from his stare. His eyes seem to deepen into dark drowning pools when she approached. His hard, lean face softened and an increment of his fury abated, lessening the overall testosterone level in the room.
“No ID and he won’t tell us his name,” Paul’s partner told the desk sergeant.
Her prisoner’s—that’s how she thought of him—lips curled slightly in a mockery of a smile.
“Reign,” he said.
Oh, shit. She had to lean against a wall. His rough voice kicked off a pulse deep in her groin making her imagine something else rough and deep.

8/31 - Reading Between the Wines
http://www.readingbetweenthewinesbookclub.com/

9/12- A Cauldron of Books
http://www.acauldronofbooks.info/

9/14- Words of Wisdom from the Scarf Princess
http://wowfromthescarfprincess.blogspot.com/