UNATTAINABLE
(Undeniable #3)
By Madeline Sheehan
Warning:
This is not a virtuous and tender love story. It’s chaotic, ruthless, and
tragic. This story takes love and kills its innocence, steals away the pure
moments, and crushes the hearts of the broken. A story born in childhood, tying
one girl to one boy, leads to a destructive path—that hurts more than it
doesn’t, that shatters more than it heals—testing the love that binds the two
through a lifetime. 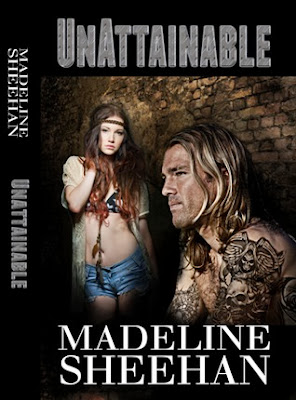 Tegen Matthews is the daughter of Dorothy Kelley, a club whore in the Hell’s
Horsemen. A plain little girl, Tegen falls into the gritty world of the
motorcycle club. When she meets a sweet, caring boy, she embraces the warmth
and affection he shows her. Cage West is the son of the president of the Hell’s
Horsemen. Tall and blond with deep brown eyes, as he grows up Cage realizes the
power of his dimpled smile and smooth drawl. With one chance encounter, Tegen
becomes forever tied to Cage. Following is a wayward journey that is filled
with regrets, mistakes, and heartache, pulling at the threads that hold them
together. Cage and Tegen fight hard but love harder, and in the end, what
matters is where the journey takes one girl and one boy, who have been twined
with one another since the beginning.
This is Tegen and Cage’s story.
Love doesn’t erase a broken heart, and it sure doesn’t change people. But no matter
how old, how flimsy, how frayed the rope of love is, it keeps you tethered to
the people you love. 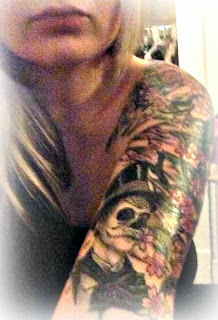 Madeline Sheehan, a Social Distortion enthusiast and devoted fan of body art, has been writing books since she was seven years old. She is the author of The Holy Trinity ebook trilogy and Best Selling Undeniable Series. Homegrown in Buffalo, New York, Madeline resides there with her husband and son.
Links
FACEBOOK | TWITTER | GOODREADS | WEBSITE

EXCERPT
Once again in town, Dirty pulled off to the side of the road and cut his engine. Toeing his kickstand down, he swung his leg over his bike and stood up straight. While looking around the dark and quiet street he lived on, he reached into his cut and pulled out his smokes. Miles City had been perfect. The polar opposite of New York City and all the nightmares that place held inside of it. He could breathe here most of the time, and ride for hours, just him and the road. A shrill, terror-filled scream followed by the distinctive thump/slap of fist meeting flesh broke the small-town silence, tearing through the empty streets, emptying into the surrounding mountains, and Dirty felt his skin pebble with goose bumps. Another scream, this one garbled, more choked than the first, then another pounding of flesh, and then…silence. Dirty had a well-practiced poker face. Aside from Deuce, no one, not one motherfucker out there, could see through his bullshit. He could throw down with the best of his brothers, beat a motherfucker senseless, kill him without a second thought, his stare as coldhearted as the rest. He’d done deplorable things to a shit ton of people, men and women alike, and never once did he so much as bat a fucking eyelash at his actions. Until he was alone. Because when he was alone he could shake, he could tremble, he could scream and yell, he could punch the walls, he could punch himself. Alone, he could cry. Alone, he could let the fear out and, Jesus fuck, there was so much fear. He lived and breathed fear…every day, every night, all the motherfucking time. It was fear ruling him that had made him what he’d become. That had turned him into the sort of monster he’d most hated. And it was all that fear inside of him, coursing through his veins, pounding in his heart, making him sweat even more fear. It was fear that had him tossing his cigarette aside, fear that had him running down the desolate sidewalk, fear that had him turning down a dimly lit alleyway. It was fear that had him skidding to a stop, taking in the scene in front of him. And it was fear that had him pulling his piece and, with shaking hands, trying to blow a hole straight through someone else’s nightmare, a nightmare that was a fuck of a lot similar to one of his own.