The Forever Gate
by Isaac Hooke 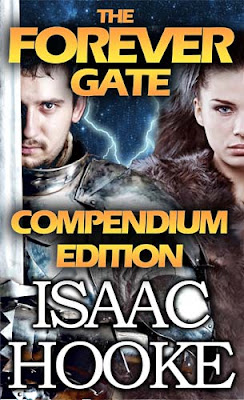 THE FOREVER GATE originally started life as a 21,000 word experimental science fiction novella. In the first two weeks of its release, that novella sold 1,000 copies without any promotion whatsoever. What began as an experiment turned out to be something of a cult hit. Isaac Hooke decided to expand upon the concept presented in the novella, and the serial was born. Each volume consistently shot to the top of the Amazon short-story best-seller list. Soon, book reviewers who ordinarily don’t read indie works gave it rave reviews. People wrote fan fiction for it. On March 20, 2013, it won the Indie Book of the Day award. The serial quite literally developed a life of its own.
ABOUT THE FOREVER GATE:3740 A.D. The ice age has immobilized the world. Colossal walls seal off the cities from the uninhabitable Outside. Humanlike entities called “gols” run society, and force the humans to wear collars that block the innate powers humankind has evolved.
What one man will do to save the woman he loves could destroy his world.
THE FOREVER GATE combines elements of science fiction & fantasy to create a unique world entirely unlike anything you’ve seen before
COMPENDIUM 90% OFF SALE – $0.99 (regularly $7.99).That’s right, for the labor-day weekend you can grab the COMPENDIUM EDITION for a whopping 90% off the digital retail price of all five FOREVER GATE novels included in the compilation–that’s 600 pages for less than the price of a pack of gum. 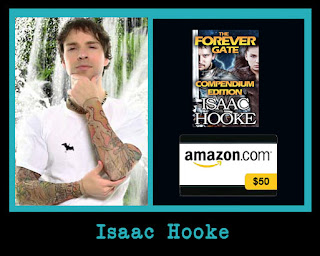 Isaac Hooke is the author of THE FOREVER GATE, the Amazon #1 bestselling science fiction and fantasy serial. When Isaac isn't writing, publishing, and blogging, he's busy cycling and taking pictures in Edmonton, Alberta, Canada. He's been writing since 1997, and he has a degree in Engineering Physics.You can follow Isaac on Twitter @IsaacHooke and his website.
Giveaway
1 Winner will receive a $50.00 Gift Card to Amazon1 Winner will receive a signed physical copy of The Forever Gate3 Winners will receive eBooks
Must be 13+ to Enter
﻿