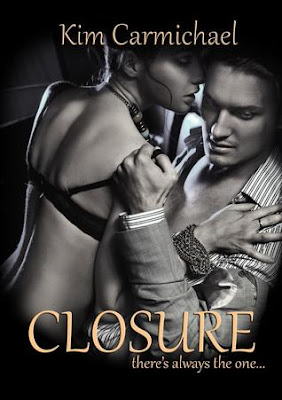 There's always the one… He's one person throughout life you think about every so often, the one who leaves his unique indelible mark on you, the person with whom you need closure. For Margaret Collins that person was Mike Taylor. After he broke her heart seventeen years ago, she left everything she knew and reinvented herself. With a new home, a new look and a new name, Riley Williams is now an up and coming journalist given the assignment to interview a Mike Taylor. She never suspected he would be her Mike Taylor. With Mike having no hint of Riley's true identity, she must decide if she will make him pay for sins he doesn't remember committing, or if she can wipe away the past and be with the one man who she has always wanted? Can she finally have closure?

There’s always that one guy. Riley watched her date and shook her head.
"Stay there, I'll get the door." Mike got out of the car.
The cellophane on the roses Mike gave her when he arrived at her apartment crinkled in complaint as she moved them to the back seat, but not before she breathed in one more time. The floral perfume combined with his cologne made her dizzy, or maybe it was the ride down Pacific Coat Highway to Malibu.
Yes, there was always that one guy, the one that every other man is measured against. Up until yesterday she hadn’t thought about Mike in years, but he was always there. His imprint was all over her, a fingerprint unique to only her. How many men had to live up to memories they couldn’t compete with?
Part of her wished she possessed the strength to turn him down. Part of her wished he hadn't shown, or cancelled. Part of her wanted this date to reclaim what she lost so long ago she forgot she missed it.
The moment she got in the car with him, she became the seventeen-year-old
Margaret again. Only her former self never got this far. At the time she convinced herself it was better, the date would have been terrible, he was too goal oriented, and he only wanted what he perceived as an easy lay.
He took long strides around the car, opened the door on her side and held out his hand.
"Riley."
Now she was Riley. Margaret was gone. Riley had hidden her away with a name change taken from her parents' middle names, a bottle of hair dye, and a move to a new state.
She paused, studying him. Tonight he wore a pair of black pants and matching blazer and dark blue button down. As always, he fit his situation perfectly. She acquiesced and put her hand in his.