**BOOK BLITZ** This Much is True by Katherine Owen 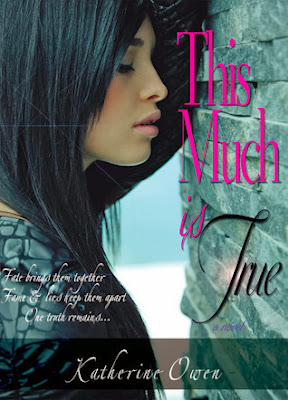 Fate brings them together
Fame & lies keep them apart
One truth remains…
She’s become the Paly High girl with the most tragic story…
At 17, Tally Landon just wants to graduate and leave for New York to pursue ballet. Her best friend Marla convinces her to attend one last party—a college party—where she can be among strangers and evade the whisperings about her heartbreaking loss of her twin that follows her everywhere she goes. She meets Lincoln Presley, Stanford’s famous baseball wonder and has a little fun at his expense—when she lies about her age and who she really is—intent on being someone else for the night and escaping her tragic story.
His only focus is baseball, but he can’t forget the girl he saved on Valentine’s Day…
At 22, Lincoln Presley’s star is on the rise—about to finish at Stanford and expected to be taken early in Major League Baseball’s upcoming draft—his cousin’s party serves as a welcome distraction. But then, he sees the girl from Valentine’s Day that he saved from that horrific car accident and can’t quite hide his disappointment when she appears to look right through him and not remember him at all. He vows to learn her name at least before he leaves. What’s the harm in getting to know this girl? What’s the worst that can happen?
They share this incredible connection, but fate soon tests these star-crossed lovers in all kinds of ways…
And yet, despite the lies being told to protect the other, and the trappings of fame that continually separate them, and in lieu of the deception by those they’ve come to trust the most; one truth remains.
This much is true.
ADD ON GOODREADS
Purchase
Amazon | Kobo | Barnes and Noble | Apple iBookstore/iTunes
AUTHOR BIO

Dark. Edgy. Contemporary. Romantic.
Were we describing me? Or my fiction? Sorry. I drink too much...coffee, not enough water.
I swear too much for God and my mother, and I slip these into my fiction. Sorry.
I'm impatient, a perfectionist, a wordsmith, a dreamer, which ends up being good and bad. I'm a workaholic; ask my fam-dam-ily.
I've written four novels in as many years: Seeing Julia, Not To Us, When I See You, and my latest release This Much Is True.
If you love angsty, unpredictable love stories, I'm yours. ♥
Author Links
Goodreads | Twitter | Facebook |  Website
Excerpt
Excerpt from Chapter Six of This Much Is True

Another interested guy tops off my glass with more of the red bubbling punch. This one is definitely older with a striking resemblance to the iconic said host of this party.
In need of a distraction from Marla’s love situation, I profusely thank this latest interested guy for the top-off. I’m overzealous. I check myself and strive for nonchalance with him, strive for the sophistication bestowed upon me by my dead sister’s designer clothes, Marla’s application of flawless make-up, and the general personification of Holly’s lively personality I’ve managed to perfect over the years. We make idle chatter about the holidays, the break from school, the lame red punch, and the limited food offerings—the opened chip bags haphazardly strewn about. I attempt to keep a keen eye on Marla, who has returned from upstairs, and now gyrates to some love song with the same more-than-casually-interested guy from before, while Charlie watches her like a self-appointed chaperon intent on saving her virtue.
The effects of spiked punch begin to descend upon me. I again glance over at covetous actions of Charlie Masterson, who is now having a heated discussion with my best friend on the other side of the room, gesturing this way and that towards the more-than-casually-interested first guy, who gyrates on the dance floor by himself.
I start towards Marla, but she waves me off. Unsure of what I should be doing, I find myself in the middle of the dance floor. Alone. To hide my embarrassment at being caught up alone in the middle of the room, I pretend to take an ever-increasing interest in the sparkling lights that someone has meticulously trailed along the ceiling’s edge. A little glazed now, the lights shimmer at me; I swill my drink in salutation. The interested guy from earlier stands in front of me again.
Tall. Dark. Handsome.
He is the cliché for sex on a stick, but he’s kept me company during the past half-hour. I brazenly take in this male-model look he has going on with his dark-brown wavy hair and his devastating, too-white smile and his tall lean body. Sure. Okay. Bring it on.
“I’m Linc,” he says during a respite from the loud music.
“As in President Abraham—”
“Not funny.” He sighs and shakes his head side-to-side and gets this disconcerted look. “Lincoln Presley.”
“Elvis is in the building then,” I deadpan.
He looks taken aback now. “What did you say?”
“I said…” I lose my train of thought because he is stunning—so good-looking, in fact—that these warning bells seem to go off in my head. I shake it to try to shut them off. “Never mind.” His look is weirding me out as if I know him from somewhere. “You remember,” I say softly. “Elvis?”
“I remember,” he says slowly and gets this expectant look. “Do you remember?”
I’m just staring at him open-mouthed. “No. My mom loved him when she was a teenager. I like a few of his songs…” My voice trails off because he looks disappointed by my answer, and I’m not sure why.
“Don’t you remember?” he asks again.
“Remember what?” I look at him blankly and then break his gaze and start toward the punch bowl for a fifth round.
He takes the glass from my hand and then hands me bottled water. “Drink this. That stuff has Everclear in it. You shouldn’t have any more of that unless you’re going for anesthetization.”
“Gallant. How noble of you,” I say with as much sarcasm as I can. Then I shake off his concerned hand on my arm, uncap the bottled water, and drink it down. “Happy now?”
He nods slowly and eventually smiles and then proceeds to take me in from head-to-toe in one long, practiced, seductive move. Smooth. I laugh because he’s so blatant about his interest in me now.
“How are you?” he asks when the music stops playing for a few welcome seconds.
Odd.
An odd thing to ask of a stranger.
“I’m fine.” I give him a bewildered what-the-hell-are-you-asking-me-that-for? look.
He leans in. “Who are you?”
“Oh.” I half-smile. “Holly,” I say with an airy wave of my right hand. The lie comes so easily to my lips that I surprise myself with the ease in which I tell it.
It is true, when you want to, you can be someone else. Seuss-like.
“Let’s dance, Holly.”
I don’t know why I say yes to him. I don’t dance at parties. I save that for my training, usually, but there’s something about him that has me gyrating out on the dance floor, getting bolder with every song they play. All kinds of things are being communicated between us, the least of which is this overriding uninhibited sexual attraction for one another.
We both know where this is going.