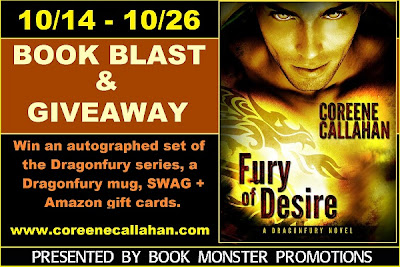 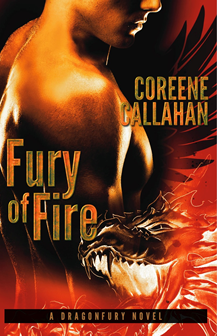 A clandestine race of half-dragon, half-humans known as dragon-shifters lives among us. Bastian, leader of the Nightfury dragon clan, is sworn to protect humankind at all costs. For him, honor and duty always come first. When the clan dictates he take a human mate to sire a son, he falters, aware that for a human to birth a dragon-shifter she must die. Myst, the woman given into his care, is the most extraordinary he’s ever met, and though he can’t bear the thought of harming her he is bound by duty.


Myst loves her life in the human world, but Bastian has captured her heart in an instant of electric connection. But Bastian and his warriors are in the middle of a deadly battle with the Razorback dragon-shifters, intent on killing every Nightfury clan member—and the humans they protect—the fate of their world and ours hangs in the balance.


An extraordinary blend of action, fantasy, and steamy romance, Fury of Fire brings to life a dangerous new world intertwined with the survival of humanity, all while exploring the meaning of honor and the nature of true love. 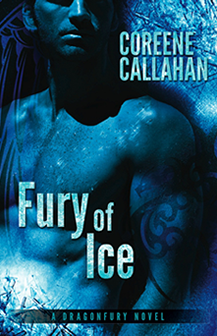 Homicide detective Angela Keen thrives on the city’s rough streets. But when she becomes the prize of all prizes in the dragon-shifter world due to her “high-energy” status, she gets more than she bargained for. Kidnapped by Lothair of the Razorback clan, Angela barely survives captivity before managing to escape. Hurt and alone with nowhere to hide, she faces certain death when Lothair uses the trace energy she leaves in her wake to hunt her down. But before he can reach her, a mystery dragon-shifter intervenes and saves Angela’s life.


Now a guest of the Nightfury clan, Angela regains her strength as her rescuer, Rikar, the last living frost dragon, gradually breaks down her mistrust. Surrendering to her desire for Rikar, but still uncertain of her feelings, Angela goes against his wishes and agrees to be used as bait to lure Lothair into the open. As the battle commences, the true struggle comes from within: Will Angela return home to the life she loves, or forsake it all to be with Rikar? 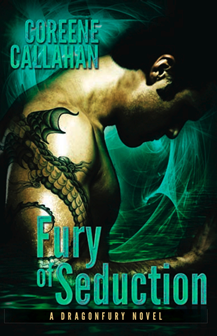 Successful landscape designer Tania Solares prides herself on living by her own terms, relying on no man to provide for her. But her carefully controlled life takes a turn for the extraordinary when her inquiry into the disappearance of her best friend thrusts her between two warring factions of dragon-shifters. Suddenly Tania’s survival depends on Mac, a newly initiated dragon-warrior who will break every rule to keep her safe.


Now that Tania knows the truth about Dragonkind, returning to her old life is too grave a risk. Ivar, leader of the Razorbacks, plots to decimate the human race, and Tania is just the tool he needs. Despite the danger, Mac cannot deny her a choice: Trade the independence she’s fought so hard to achieve for safety in a magical world, or turn her back on the man she’s grown to love in order to reclaim a freedom that might not last? It is an impossible choice. And yet a sacrifice must be made… 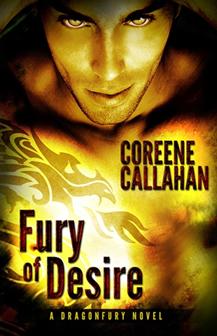 Release Date: October 15th, 2013
No warrior of the Nightfury pack is more complicated or damaged than Wick.


Scarred from a childhood of slavery and torture, Wick cannot bear the touch of another person. But all bets are off when he meets J.J. Solares. When she is unjustly imprisoned, Wick agrees to help rescue and keep her from harm. But Wick lives a life of self-imposed isolation and venturing into the world to seek justice for J.J. may be more than he can bear.


Brutalized by the harsh reality of prison, J.J thinks she is hallucinating when a majestic dark-haired god sweeps in to save her—and Wick is shaken to his core by the attraction he feels for J.J. But neither is out of harm’s way yet. When they find themselves at the center of a Dragonkind war, they are forced to make the ultimate choice—surrender to their fears or accept each other’s love. 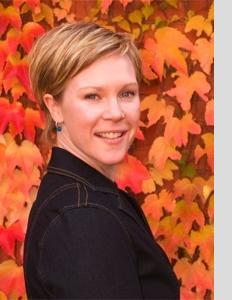 As the only girl on all guys hockey teams from age six through her college years, Coreene Callahan knows a thing or two about tough guys and loves to write about them. Call it kismet. Call it payback after years of locker room talk and ice rink antics, but whatever you call it, the action better be heart stopping, the magic electric, and the story wicked, good fun.
After graduating with honors in psychology and working as an interior designer, she finally succumbed to her overactive imagination and returned to her first love: writing. And when she’s not writing, she’s dreaming of magical worlds full of dragon-shifters, elite assassins, and romance that’s too hot to handle. Callahan currently lives in Canada with her family and writing buddy, a fun-loving golden retriever.


GRAND PRIZE: signed set of the Dragonfury series (4 trade size paperbacks), a Dragonfury travel mug and SWAG (US/CANADA ONLY - INTERNATIONAL WINNER WILL GET A $25 GIFT CARD INSTEAD)
2nd Place: $20.00 gift card to Amazon

10/23 Taking It One Book at a Time
http://takingitonebookatatime.blogspot.com

10/25 Where the Night Kind Roam
http://paranormalromancenovel.com/

10/26 Over the Edge Reviews
Http://overtheedgereviews.blogspot.com