From Gods
By Mary Ting 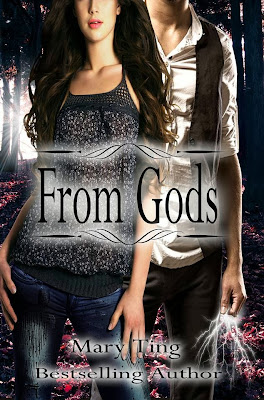 Did you just see a flash of lightning across the sky on a clear sunny day? It’s not from Mother Nature. It is most likely from Mason Grand, swoon-worthy demigod, one of Zeus’s descendants.


Skylar Rome is supposed to be having the best summer ever before she heads off to college. Little did she know, her whole life was about to change while visiting her cousin. Nearly drowning at the beach due to unknown forces, one of the Grand brothers she’d just met, Mason, saves her life. Cool, collected, mysterious, and dangerously good-looking, Skylar is drawn to him from the start. Though she knows he is the type of guy good girls stayed away from, it seems he is always saving her life, and the attraction was inevitable.


Upon meeting the brothers, strange things begin to happen. When she accidentally kills one of the brothers, it throws her life into turmoil, as they search to find the answers. Implausibly, she gets caught up in a world of the descendants of ancient gods, all who have super powers. Not only is her discovery difficult to accept, evil beings are after her. Running out of time and running for her life, she must unravel a mystery. What do they want from her? Forced into a battle set into motion long before she was born, will she find the answers, or will she die trying?
From Gods book trailer

Mary Ting resides in Southern California with her husband and two children. She enjoys oil painting and making jewelry. Writing her first novel, Crossroads Saga, happened by chance. It was a way to grieve the death of her beloved grandmother, and inspired by a dream she once had as a young girl. When she started reading new adult novels, she fell in love with the genre. It was the reason she had to write one-Something Great. Why the pen name, M Clarke? She tours with Magic Johnson Foundation to promote literacy and her children's chapter book-No Bullies Allowed.
Links
Facebook | Facebook | Twitter | Website | Blog
Goodreads (Mary Ting) | Goodreads (M. Clarke)


“You’re wet. You should take off your clothes.”
What a way to avoid a question! Skylar blinked her eyes in disbelief. Did she hear him correctly? “Excuse me?” Not wanting to assume he was really asking her to strip off her clothes, she didn’t move a muscle, but the way his piercing eyes laid on her, she might as well have already been naked. Then she inwardly gasped when he started to unbutton his shirt. Her eyes shot to the floor, then back to him, and then to the floor, wondering what she was supposed to do in this awkward moment.
“Here. Go change in the restroom. You don’t want to catch a cold.” He placed his shirt in front of her.
She looked up to see him shirtless for the very first time. With all the right curves and tightness, he looked like a statue of a god. He was beautiful and perfectly toned, with satin-like skin, which looked like it would be smooth to the touch. And there was a small tattoo shaped like a lightning bolt on his upper right arm, toward his shoulder. Way too sexy!
As warmth flushed her face, she tried not to stare, but there was no way around it. “Umm…you won’t have a shirt,” Skylar said, thinking that was the most idiotic thing she had said so far, but she couldn’t think when he was half-naked in front of her.
“I’m not cold, but you will be.”
Mason was right. Skylar didn’t realize she was shivering until she placed her hand out to take his shirt. The adrenaline from the initial shock had kept her warm, and now it was wearing away. The blasting air conditioner didn’t help either. “Thanks.”
Just as she pivoted right toward the restroom, even though she was deathly scared to go back, Mason gripped her arm. “Wait. Don’t go in there without me.”
His sudden protectiveness surprised Skylar, but then again, he had saved her.

Giveaway
﻿
Mary Ting has an awesome giveaway over at her blog, so click the link and go enter!
CLICK HERE