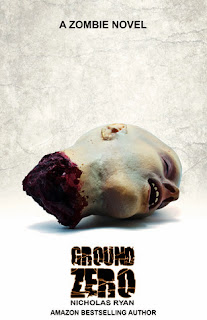 Blurb- Aboard a freighter bound for Baltimore harbor, an Iranian terrorist prepares to unleash an unimaginable horror upon the United States. The ‘Wrath’ is an undead plague – an infection that consumes its victims with a maddening rage and turns them into mindless blood-thirsty killers.
Jack Cutter is just an ordinary guy dealing with a dreadful guilt when the virus tears through his home town. Before it’s too late, Cutter will have to find a way to survive, and find a reason fight:
HIS REDEMPTION.

Review- Let me start by saying this is my first ever taste of zombie fiction. I have never had any sort of urge to read it at all as I don't do well with creepy zombie stuff. It scares the crap out of me. Anyway I thought I would suck it up and help a friend with this one for a review, so here we go.

From the first page we are thrown into the action, no drawn out process, just straight to the point. First we are introduced to a terrorist who has plans to put the USA into turmoil in the form of a zombie creating virus. In his point of view my first thought was, "what have I got myself into". I certainly didn't want to read about destroying a country through a terrorists eyes. I was glad when it skips to other peoples points of view then finally settling on our main character Jack Cutter. A man who has lost everything, leaving him with nothing to fight for.

Ground Zero is a story of true courage and the natural human instinct for survival. Although the concept of the story wasn't overly original (zombie apocalypse), the underlying story made up for it. As did the authors ability to create such vivid scenes that had me squirming in my seat. Blood and gore, rotting flesh, exposed organs, complete and utter grossness! Every scene was so well descriptive that I was able to picture everything in my mind. And let me tell you now, it wasn't pretty. We follow Jack on his journey of finding a purpose and survival. You will find yourself rooting for him as he comes across obstacles that are both scary and horrifying (the all important connection to the character).

All in all Ground Zero is full of fast-paced, intense action that had me on the edge of my seat with sweaty palms and a queasy stomach. So if you want a read that will have you glued to every word with anticipation and anxiety, this one is for you. The only thing stopping me from giving it the 5 star rating is the abrupt ending. It kind of came out of no-where leaving me with no real closure, otherwise I thoroughly enjoyed every gruesome bit of it, zombies and all!

To purchase your gruesome copy head over to AMAZON.

Happy Reading!
Posted by Renee Booth at 6:00 AM