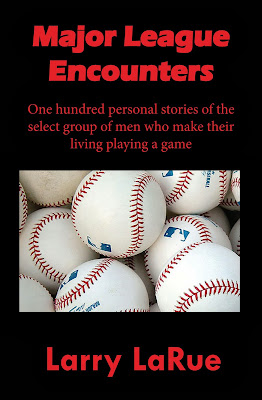 It’s an exclusive club. Thirty teams, 25 players each, 750 players in all. For every new player that wins a place on the roster, another player is removed. A few talented players have careers that cover more than two decades. Most last less than three years. But for those who can retain a place on the roster, the money is good – minimum wage is almost $450,000 a year. And if they’re really superstars, they can end up with an annual eight-figure salary. But there is more to it than money.

The men of baseball love the game and they love the clubhouse. The game sometimes costs them their wives and time with their kids. The clubhouse is where they bond as a team and as a family. As with all families, it is a place of laughter and anger, tragedy and loss, happiness and dysfunction. And what unites that family is love. The love of a game called baseball.

This collection of encounters with some of these men by sportswriter Larry LaRue takes the readers inside the clubhouse and behind the scenes to share with the reader what these men have accomplished and the price they have paid.
Buy Links 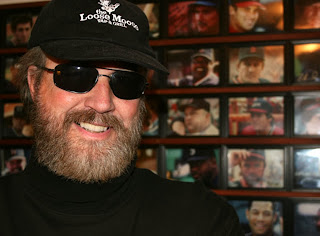 
Newspapers were part of his life long before Larry LaRue started working for them at age 18. His grandmother was a typesetter for a weekly in San Dimas, California, and he sat in her lap while she’d run an old lead-type machine. He was first published at 10, when a San Clemente newspaper ran his story on Pookie, his dog.
He’s been writing ever since. Five newspapers, a business journal and an entertainment magazine wrapped around brief careers as a window washer, bouncer, and private investigator. Always, he wrote.
There was a book on an American Capuchin priest who performed exorcisms in New York and Iowa, another on political cartoonists, a novel based on a news story he followed, and a book of major league baseball anecdotes. All wound up in a drawer or a closet.
Since 1976, there’s been another constant in his life – George Cunningham. As co-workers, backpackers, entrepreneurs, political opposites, writers, photographers and friends they have pursued projects and dreams together.
Reader Publishing Group may be the best yet for George and Carmela Cunningham, and LaRue was one of the first to leap on their backs.
Currently a writer with the Tacoma News Tribune covering the Seattle Mariners, LaRue’s sports writing can be found at http://www.thenewstribune.com/sports/mariners/ and you can follow him and see his photography on Facebook at facebook.com/kwlarue, Twitter at (@LarryLaRue and the News Tribune Mariners’ blog at http://blog.thenewstribune.com/mariners/.
His most recent ambition hasn’t changed in 35 years – LaRue is writing projects he hopes Cunningham can use to get him out of the newspaper business.

Top 10 Favorite Things with Larry
1. What is your favorite song?
‘Layla’ or most anything from Jackson Browne or Van Morrison.
2. Favorite Weapon?
A pillow. Nothing better than an old-fashioned pillow fight.
3. What is your favorite type of food?
Mexican.
4. Favorite Tattoo design?
A heart.
5. Favorite writing utensil?
An old fountain pen, but the reality is I rarely write without a computer.
6. Place to write?
My home office. Second story, two windows, both overlooking 2 ½ acres of trees.
7. Favorite Quote?
From Edward Kennedy, at the funeral of his brother, Robert: “He should be remembered simply as a good and decent man who saw wrong and tried to right it, saw suffering and tried o heal it, saw war and tried to stop it.”
8. Your Favorite Phrase?
‘Do the math!’
9. The part of a story you like writing best?
Capturing the personality of someone unique, so that a reader feels what you felt upon discovering it.
10. Favorite Book?
“Lonesome Dove’