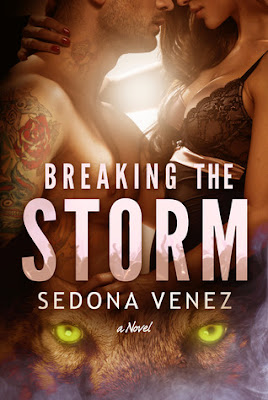 I wanted Knox. There was no need to deny that fact.

Knox was the type of guy you gravitated to, who stood out in the crowd. It wasn’t just his classically good-looking features and perpetual five o’clock shadow. It was his raw energy that entranced me, that made me feel like a giggly, fumbling high school girl, happy to be in his presence.

Yes, there’s no denying it, front man Knox Gunner was a sexy badass.

It didn’t matter that he initially thought I was some bored, rich girl trying to live out some wild fantasy of being with a starving musician. It was uncomplicated and that’s what we both wanted. At least that’s what I convinced myself. I wasn’t ready to admit to myself that my feelings for Knox were getting dangerously deep—waiting to lay siege on my heart. I was falling for him… and this was dangerous. The rules were clear: falling in love would obligate me to expose what I truly was, setting in motion his slow march to death.
ADD ON GOODREADS

TLC is a NYC girl (go Brooklyn!) and is obsessed with books. She also has a borderline unhealthy obsession with her iPad. Her favorite books… anything with rockers, hot alpha men and wolf shifters!

Her true love for writing blossomed when she began to write New Adult and Adult novels with romance, music, and sexy men as her alter ego "Sedona Venez".

Find me on pinterest to get some great Breaking the Storm inspiration!!
http://www.pinterest.com/tlcauthor

Twitter: @tlclarke_tlc
Excerpt
Giving him a playful pout while trailing my fingers across his chest, I said, “That's what you say, rocker. But once you win tonight and move on to rocker hall of fame, I’ll be nothing but a distant memory.” I wiggled my eyebrows. “But hopefully a very hot one.”
He grabbed my chin roughly. “You don’t honestly believe that, right?”
My smile was wobbly. Shit! I was doing everything that I promised I wouldn’t do, getting attached. Dammit! I couldn’t even do this right. How hard was it to stick to straight-up sex without all the emotional attachment? Obviously, really hard because here I was, falling straight into the deep end of the relationship pool, which is an absolute no-no. Double damn. I sighed loudly, debating on whether I should be brutally honest, but I settled for just honest. “Knox, men disappoint.” All the time, I deliberately left unsaid.
His eyes were hard when he said, “I don’t give a shit about the men from your past. This is about you and me. And regardless of what happens tonight, I'll still want you, Storm. Fame won’t ever change that.” He grabbed the back of my neck, squeezing softly. “You know that we can have something good here, right?”
My heart raced. I resisted the urge to lower the walls around my heart, reaching for something unattainable. I tried not to wish deep into my soul that things between us had a snowball’s chance in hell of turning out all sweet like in the movies. But they wouldn’t, couldn’t. Love was a burden.
Reaching up, I tried to smooth away his scowl. “Nothing lasts forever, Knox. I graduate in a couple of months.” I paused, swallowing the painful lump of emotions tightening my throat. “And you have to move on and pursue your music career. All I want for you is success… for people to hear that awesome voice and songwriting talent.”
“And why can’t you fit into that equation?” He combed his fingers through my thick, wild mass of auburn curls.