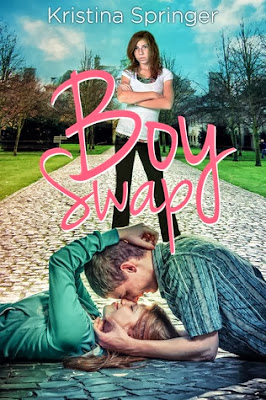 Boy Swap: The secret to sisterly love and scholarly bliss.

Research shows that seven out of ten girl fights are over a guy. The Boy Swap Club fixes all that. In an effort to spread around male cuteness and minimize fights and backstabbing, they just share boyfriends. And Brooke Thomas, consummate band member, has been asked to join the super secret club because the president of the club has the hots for her guy.

Brooke doesn’t want to share her boyfriend. I mean, who does? But how can she say no? She, a second chair flutist in the school band, finds herself sitting between the Varsity Cheerleader Captain and the Homecoming Queen at the first meeting. Her friends will never believe this in a million years. Too bad she can’t tell them. But she knows. This one event can change her entire life. What if she becomes actual friends with one of these girls? It might be worth sharing her boyfriend.


About the author
Kristina Springer is the best-selling author of the young adult novel THE ESPRESSOLOGIST (Macmillan FSG, October 2009) which sold film rights and is being filmed for a web series, has sold in six countries, and was a 2010 Society of School Librarians International Honor Book; the middle-grade novel MY FAKE BOYFRIEND IS BETTER THAN YOURS (Macmillan FSG, August 2010) which Meg Cabot says is “Irresistible as a fluffy kitten. I laughed out loud and so will you!" was a Scholastic Book Club Bestseller and a 2012 YALSA QUICK PICK and will be out in paperback this December; a young adult novel, JUST YOUR AVERAGE PRINCESS, which was a Fall favorite (Macmillan FSG, October 2011) and an ebook only young adult novel, THE PAPARAZZI PROJECT, which hit #1 on the Amazon Top Free Teen Romance eBooks list earlier this year. Her fifth book, BOY SWAP, is out in ebook format October 16th. She has a Bachelor of Arts in English Education from Illinois State University and a Master of Arts in Writing from DePaul University. You can read more about her at http://www.kristinaspringer.com/.
Links
Website | Facebook | Twitter
Excerpt

Raise your right hand and repeat after me:
We, the members of the Boy Swap Club, being of totally sound minds and rockin’ bodies, do here forth promise to be true to the following rules:


For your chance to win an ecopy of BOY SWAP leave us a comment with your email addy and we'll pick a winner on Monday, 28th October 2013.
GOOD LUCK!!!
﻿