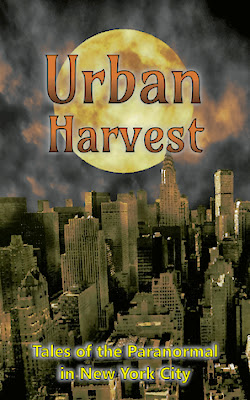 New York City–it’s home to 8 million people trying to make their way through the day–a crop of humanity seething with hopes and fears, dreams and nightmares. Autumn comes, and nine authors harvest nine tales from this unique setting and people. From stories of everyday life in an otherworldly light to nightmarish tales of human darkness, Urban Harvest has something for everyone.

In keeping with the spirit of harvest, all proceeds from this anthology will go to support City Harvest, an organization that feeds NYC’s hungry.


So many authors in this amazing book!
Here's an Interview and Excerpt with Author Donna Ansari﻿


Donna Ansari is the editor and a featured author in Urban Harvest: Tales of the Paranormal in New York City.

Tell us about Urban Harvest. Why urban fantasy? Was this your first anthology? How did you settle on City Harvest as the charity of choice?

New York City is so full of people that on one hand, it seems a highly unlikely location for paranormal activity. But on the other hand, it also seems like the perfect location—lots of places where all sorts of nasties can hide in plain sight.

There are so many worthwhile charities, so picking one was a difficult decision. But you can't live in NYC without seeing how many people are going hungry. It's often a stark contrast to the amount of cheap junk food that's available. And with the season now being autumn, the harvest, I couldn't help but think of those who go without enough food.

As an editor, what do you look for when reading submissions? Can you share any tips for writers (like something you see repeatedly or things that bother you)?

Apart for being good stories in their own right, each story that goes into an anthology has to fit in and play nicely with all the others. In this anthology, I tried to feature a mix of different kinds of stories, while having them all feature NYC in a prominent way. As to what particularly bothers me as an editor--that would be writers who don't proofread their work! You could have a brilliant idea for a story, but if I'm going to have to spend several hours picking through the mistakes, it's not worth it.

Who are some of your favorite authors? Have they inspired you in any way?

About 20 years ago I first read a book by Charles DeLint, and was introduced to the concept of urban fantasy. Neil Gaiman has also been a big inspiration to me, particularly Neverwhere, which takes place in London, another one of my favorite cities. Mike Carey's graphic novel, Lucifer, taught me that it's okay to route for the "bad" guys, and I'm currently enjoying his urban fantasy Felix Castor series.

Can you tell us a little bit about any other projects you are working on?

I also write an urban fantasy series, Vampire in the City, which is about vampires in New York City.

Emma, the protagonist of the series, was turned into a vampire in book one. Prior to becoming a vampire, she worked at an ad agency, lived alone, and had relationship issues. Now she still works at an ad agency and still has relationship issues, but lives with a witch and a werewolf. Emma has not fully come to terms with being a vampire yet. She is happy about not being allergic to her cat or having to wear glasses anymore, but doesn't like to involve herself in vampire politics. There will be a total of six books in the Vampire in the City series, and Book Four is about to come out.

Do you think you'll put any other collections together?

I enjoyed putting together Urban Harvest so much that I am strongly considering doing another one next year. Perhaps I would do one with a different theme and to benefit a different charity. An anthology to benefit an animal shelter that features shifters sounds kind of cool.

Where can readers find out more about you and your books?


Vampires of the G Train

Deciding that keeping him talking was the best strategy, she asked, “Are you going to turn me into a vampire?”
The man looked surprised. “No. Why? Do you want to be a vampire?”
“Sure. I mean, it sounds so interesting.”
“I guess it’s pretty cool,” he admitted. “Even though I’m kind of new at it.”
“What do you like best about being a vampire?” Claire asked.
“Besides the blood?”
Claire gave the generally accepted hand gesture for hurry it up.
“Well, doesn’t everyone want to live forever and stay young and beautiful?” he asked.
Claire tilted her head to the side and gave him a questioning look.
“I mean young,” he quickly amended.
Then what Claire had been waiting for happened. With a lurch, the train finally started moving again.
The man frowned. “Must be on some kind of a switch or a timer.”
But Claire didn’t want him to notice what was happening with the train, so she said, “What’s your name, anyway?”
“It’s Harold.”
“Do people call you Harry?”
“No.”
“Anyway, Harold, I’m Claire. So, can you tell me what it’s like being a vampire?”
“Well, I’m new at this,” Harold admitted.
“You said that. How new? Like are you less than a thousand years old or something?”
“I was just turned about a week ago. As I was saying, you are meant to be my first kill.”
“Me, specifically?” Claire asked. “Or just any idiot who wandered into the train alone at night?”
“Not you specifically,” Harold said, almost smiling.
Claire suddenly had an idea. “How about I bring you over my boyfriend’s apartment instead? He’s much bigger than me, and that means more blood for you.”
The man shook his head. “I’m not supposed to get off the train.”
The G train had just pulled into a station, and the doors dinged open.
“Well, that works out for me,” Claire said. She managed to twist around enough to land a pointy elbow in his inner thigh before jumping up and leaping off the train. Unfortunately, something caught her mid-leap.
Harry had caught her around the waist and pulled her back into the train as the doors closed.
“Good try. I’m not letting go of you again.” He sat back down and pulled her beside him. Then he yanked her head to the side until her throat was by his mouth.