Welcome to our stop on the Something Wicked blog tour! Enjoy! ^_^
Something Wicked
(The Psychic Detectives Series, #2)
Can be read as a stand-alone
by Angela Campbell
Published by: Harper Impulse
Publication date: October 31st 2013
Genres: Adult, Paranormal, Romantic Suspense 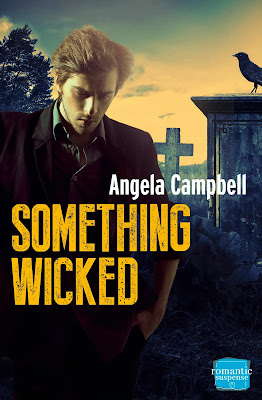 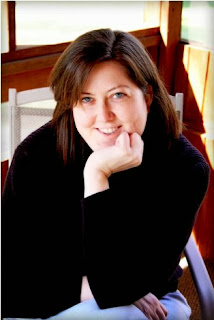 Excerpt
“It must be your lucky night, hon.” A woman’s voice drew her attention.
Alexandra blinked up at her waitress as the young woman slid a mug of beer in front of her. Did the girl seriously just call her hon?
The redhead nodded over her shoulder. “The hunk at the pool tables bought you a drink.” She winked. “Enjoy.”
Oh, no. Not only were the dead people around here clamoring for her attention, so was some a-hole on the prowl. She bit back a groan and lifted her gaze to give the man a polite shake of her head, a silent thanks but no thanks and –
Hello, Mr. Delicious.
He was hands down the most criminally sexy man she’d ever laid eyes on, and for a woman who worked with some serious man candy these days, that was saying a lot. He studied her from the billiards area as he chalked up one of the cues. He was the only person over there, playing a solitary game while most people congregated at the bar. A slight smile teased his mouth as she managed to lift the mug and nod. So what if she hated beer? She’d gulp the whole thing in one go if that sex god wanted to watch. He nodded back, gestured to the pool table beside him, and—
Oh, yeah. She was tempted to saunter over there and see what happened. Beyond tempted. She’d never had a one-night stand in her life, but maybe this was as good a time as any.
“Well, I’ll be! He sure seems to have struck yer fancy.”
Oh, no. She scrunched her brows and shook her head. She had a bad feeling about this.
The ghost wooted. “Oh, but I think he has.” He glanced toward the billiards. “And I dare say he has taken quite a fancy to you, miss. Comes in here a lot, that one does. Never been able to spook ‘em though.” Derby Hat Guy abruptly stood and started walking toward the other man, saying, “Let’s give ‘em a game. Have a bit of fun with the rascal.” He rubbed his hands together.
“Wait! Uh,” Alexandra jumped to her feet and realized a few seconds later she was practically on top of the pool table when Mr. Delicious said, amused, “Whoa now. I’m guessing you like a good game of pool?”
Among other things.
She bit her lip and tried to ignore the ghost bent over the other end of the table, reaching for two of the balls that had been scattered near a corner pocket. She’d made this poor, delicious man a target of the ghost’s tomfoolery. Oh dear. She needed to fix this.
“Pool?” Her eyes widened when Derby Hat Guy picked up the white ball behind Mr. Delicious and moved it clearway across the table. There was no orange glow to it, which meant the ball had actually moved. Had anyone else seen that? This ghost was an old and smart one. Not many could move objects like that. “Yeah. Yeah, I love pool. Game on.” Leaning over, she slapped the green felt and flicked her fingers a few times toward the wall, trying to convey the message to Derby Hat Guy to get lost.
Mr. Delicious held out a cue stick to her in offering, distracting her from the ghost past his shoulder. “Great. We’ll start a new game. I was getting tired of losing to myself.” He looked her up and down where she still leaned against the table and seemed to like what he saw. His smoldering blue eyes burned with heat so intense, she felt her insides ignite. He wriggled the cue in his hand. “You know how to use this thing?” His smile was kicked up to full charge on the suggestive meter.
Oh, my, he was flirting, and that was a game best played by two. Accepting the wooden pole from him, Alexandra arched a brow and slowly ran a finger along its length. “I can handle a stick pretty good.” She pursed her lips, blew at the chalk on the end, and slowly batted her lashes when she looked at him again. “Besides, what woman doesn’t love to bust some balls every now and then?”
He gave an appreciative chuckle. “All right.” He began setting up a new game and she sighed, watching his taut backside move deliciously against his faded jeans as he bent over. Damn. Levis should pay him a royalty. Who looked that good in jeans, besides Calvin Klein models? No one, except this guy. Maybe he was a Calvin Klein model. He definitely had the face and body for it.
And maybe she should offer to buy him a drink or something—you know, to apologize for making him a target of the resident ghost.
“Can I get you a beer?”
“Nah. I’m good.” His back muscles stretched against his black t-shirt when he rested his elbows on the table, highlighting some serious muscle definition beneath.
“Something else? Whiskey?” She tilted her head at him. Me?
“No thanks.” His eyes twinkled with amusement as he straightened and moved closer. “Girls take advantage of me when I drink. I can see I’ll need to keep my wits around you.”
Giveaway