Now that Garret’s decided he’s no longer following the rules of his wealthy family, he can finally develop a closer relationship with Jade. Things are going well, but Jade still worries that being with Garret is only temporary. And because of that, she’s not sure how much of herself and her past she’s willing to let him see.

Garret does all he can to assure Jade that the two of them can last, but convincing her of that is difficult when she’s never trusted anyone. So he has to show her, by being there when she needs him the most, even when she tries to keep him away.

The mysterious letter from Jade’s mom still haunts her and now she’s getting threatening phone calls. Someone from Jade’s past will stop at nothing to keep his secrets from getting out. And his number one secret is Jade.
ADD ON GOODREADS

Buy Links for Choosing You (Book 1) 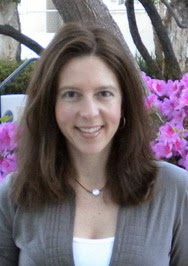 Allie Everhart writes about dating, love, and romance. She’s also a freelance writer for magazines and websites. Before freelancing, she was a book editor for a publishing company where she worked on several NYT bestselling nonfiction books. She loves to read as much as she loves to write. And when she’s not reading or writing, she’s outside running, which is when she gets her best book ideas.

Author links
Goodreads | Twitter
Excerpt
Garret swims over and stands up right behind me, placing his hands on the edge of the pool around my head. He’s so close I can feel his warm breath on my neck and it sends a shiver down me.
“When are you gonna admit I’m a better swimmer than you?”
“Never.” I flip around and let go of the pool, quickly grabbing his shoulders so I don’t sink since I’m too short to touch the bottom. But now my legs are dangling awkwardly and I’m having a hard time holding myself up. Garret notices and casually puts his arms around me, pulling our bodies together.
My heart is beating wildly but I try to keep my breath steady to hide it. “When are you gonna admit I’m a better runner than you?”
“I’ve already admitted that. I’ve told you that several times. I’ll say it again. You’re a better runner than me. Now do you have anything to say to me?”
“Hmm.” I pretend to think. “Nope. Nothing.”
He smiles. “You just can’t give me a compliment, can you?”
“I give you compliments all the time!” I wrap my legs around his waist. He doesn’t even react.
“Like what? Because if you gave me one, I totally missed it.”
“I don’t know, but I’m sure I’ve given you one.”
“I’m sure you haven’t.” He keeps his eyes on mine, barely blinking.
“I told you how much I liked those lights you gave me for my birthday. That was kind of a compliment.”
“Not really.” He slides his hands down under my thighs, supporting my weight. It allows me to loosen my grip on his shoulders but it also makes me completely breathless. “Jade, is there anything I do that you like? Anything you think I’m good at?”
I know what he’s implying and yes, there are many things he does that I like. And he’s definitely good at them. Like the way he’s holding me right now? Definitely good.
Before I can speak, he slowly licks the water from my lips until they part, then slips his tongue in my mouth. I wrap my hands behind his neck as his tongue explores my mouth in a way that gets my body so scorching hot that even the water can’t cool me down.
After a few incredible, mind-blowing minutes, he slowly pulls away.
“Do you like it when I do that?” There’s that cocky smile I know and love.
I smile back. “I’ll admit you’re pretty good at that.”
“Finally! A compliment.” He lets me go, forcing me to grab the edge of the pool. He sets himself up in the lane next to me like he’s preparing to swim laps.
“Hey, where are you going?”
“I have to practice.”
“So we’re just done here?”
“We haven’t even been on a date. I was only kissing you because I was trying to find something you thought I was good at. And I did. So we’re done.”
He takes off swimming, leaving me wanting more. Much, much more.
Giveaway