**COVER REVEAL** Behind the Pitch by Eden Butler w/ Giveaway


"Behind the Pitch" is a novella set in the "Chasing Serenity" universe and is told in Declan Fraser's point of view. The release date is set tentatively for December/January.
Expat Irish rugby player Declan Fraser only wanted to play the sport he loves. He didn’t want to be stuck in this middle-of-nowhere town at this all too quaint university. He didn’t want his team captain to be an entitled jackass who switched Declan's position on the squad just to make himself look good. And he sure as hell didn’t want to fall in love with graduate student Autumn McShane.
Autumn is stubborn, but gorgeous; she bristles at any hint of dependency on anyone or anything, but she’s also a survivor. She’s everything Declan didn’t know he wanted. When Autumn finds herself in the middle of a challenging bet with her ex-boyfriend - who just happens to be the arrogant team captain that Declan hates - he feels honor bound to help her out. But he didn’t expect to fall for her in the process.
“Behind the Pitch” reveals the most twisted and erotic thoughts in Declan’s head as he navigates through his on again/off again, frustrating and deeply erotic relationship with Autumn McShane.
And lordy, does he have a filthy mind. 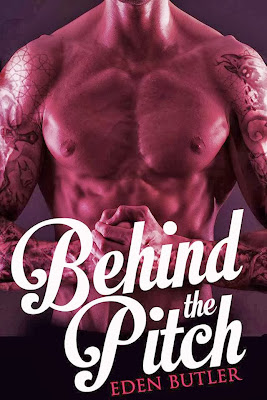 ADD ON GOODREADS
Behind the Pitch Excerpt

I break away from her, eager for a breath, for just a second to clear my mind. Words have become twisted in my throat. I can only stare at her, count the freckles over her cheeks, watch the drop of her eyelids as though she is high, as though I’ve somehow rendered her incapable of clear thought. She’s fecking gorgeous and she taste so damn good.

“Not exactly the first kiss I was expecting,” I say. I know what hides behind my small confession, but at present, I don’t bleeding care. Let her think me weak, let her think that I am putty in her hands. I bleeding well am.

“That…that was the second.”

“Me molesting you while pie-eyed doesn’t count.” I try not to wince thinking about that night on the pitch. God, if I’d only held off, acted like I had any sense a’tall, maybe I could have had this sooner, and more of it. I release a breath, sure that another apology is weighted in my throat. “Just now, that was really the first.” I pause, watch her face to see if she will push me away, if there’s any resistance at all to how close I hold her. How fecking much I want to kiss her again. When she doesn’t bristle or put me off, I go for it. “And here’s another.” 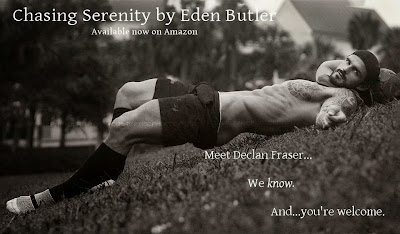 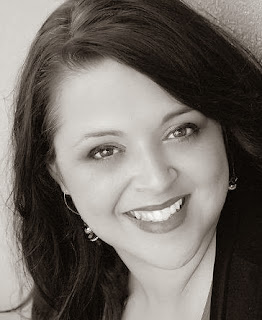 Eden Butler is an editor and writer of New Adult Romance and SciFi and Fantasy novels and the nine-times great-granddaughter of an honest-to-God English pirate. This could explain her affinity for rule breaking and rum. Her debut novel, a New Adult, Contemporary (no cliffie) Romance, “Chasing Serenity” will launch October 2013.

When she’s not writing or wondering about her possibly Jack Sparrowesque ancestor, thinking up impossible plots, Eden edits, reads and spends way too much time watching rugby, Doctor Who and New Orleans Saints football. 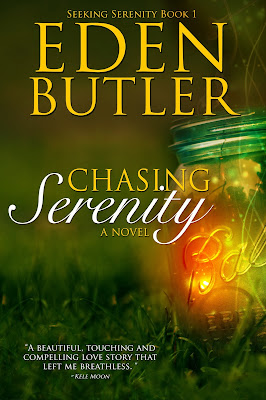 Graduate student Autumn McShane has had her share of heartbreak. She's been abandoned and betrayed and she lost her beloved mother in a tragic car accident five months ago. That loss damaged her body and fractured her spirit but she's learning to recover, until her ex-boyfriend returns to town, intent on making her life miserable.
Declan Fraser hates her ex as much as Autumn does, but the last thing she needs is to put her trust in the hands of another man, especially one like Declan: his hard body and lulling Irish accent makes more than a few girls weak-kneed. The talented rugby player is rude and sarcastic, with tattooed, muscular arms and a cocky attitude, but he's the only one who can help Autumn win an ill-advised bet that, if lost, could cost her more than she's willing to pay. The reluctant alliance between Declan and Autumn stirs up cravings she doesn't want to admit, but Declan is a hard man to resist.
Just when Autumn starts letting down her carefully constructed walls to the sexy bad boy, he betrays her when she needs him most. Autumn suspects Declan has secrets, and she is determined to uncover what drove him away from her, even if that means fraternizing with the enemy. But will the truth return Declan to her arms or add to the scars on her heart?