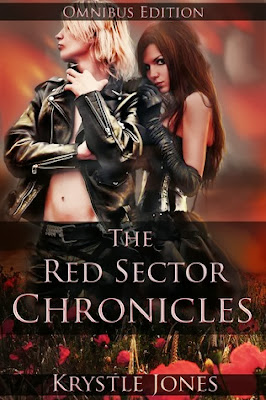 The strength of Sloane’s heart is about to be put to the ultimate test.
After the Eclipse – the night vampires began openly slaughtering human victims – everything changed. Out of fear, the government salvaged what remained of the human population and enclosed them in massive, security-laden cities called White Sectors, while marking the vampire infested territory as Red Sectors.

When seventeen-year-old Sloane McAllister’s twin brother disappears, she seems to be the only one who thinks he isn’t dead, and she vows to stop at nothing to find him. Gathering her courage, she braves the Red Sector to search for clues to his whereabouts. By chance, she encounters Aden, a handsome, charismatic vampire with a hidden agenda. He turns Sloane against her will and whisks her away to his underground city. Enemies quickly become friends as Sloane struggles against her attraction to Aden, and resists her growing loyalties to the creatures that ruined her life.

But the vampires themselves are the least of her problems. A war is brewing between the humans and vampires, along with a growing web of deceit and betrayal. And before it’s all over, loyalties will be tested, hearts will be broken, and no one’s lives will ever be the same.

Goodreads for the Omnibus

Krystle Jones was born and raised in the small, southern town of Tullahoma, Tennessee. Reading and writing have been lifelong passions of hers. In addition to being a novelist, she is also an award-winning flutist, and moonlights as a voice actress. Her voice can be heard in the popular online game, Alice is Dead 3.
Author Links
Website | Twitter | Facebook | Goodreads
Excerpt
The Scarlet Dagger *free download!* Or get the whole trilogy for $5.99. *Offer valid through November 25th.*
I opened the door and flipped on the light. At first, I thought it was the smallest closet ever. Then I looked to my right, and my eyes nearly popped out of my head. The closet ran behind the entire length of the TV wall, lined with racks, cubbies for shoes, and drawers. For the most part, the racks were empty, save for a few pairs of jeans and some plain shirts.
“All this” – I motioned around the room – “is for me?”
Aden nodded. “Yep. If you don’t like the color –”
“It’s amazing. I wouldn’t change a thing.”
Mrs. Knight’s voice floated up the stairs. “Guess I’ll go claim that aspirin,” Aden said. “There are clean towels in the bathroom if you want to shower.” He turned to leave.
“Hey,” I said.
He paused, quirking a brow in that quizzical way of his.
“Sorry I punched you in the face,” I mumbled, shifting my weight.
He tried to grin and then winced, touching his jaw. It was swollen, but I could tell it was already starting to heal. As he looked at me, something in his eyes shifted. “You can make it up to me.”
My brows furrowed.
He walked back, stopping a few inches in front of me. “Go on a date with me.”
I blinked in surprise. That wasn’t what I had expected him to say. “I just punched you in the face, and you want to go out with me?”
“Eh, it’s all relative. The way I see it, it’s not every day I find a girl who can kick my ass. It’s kind of hot.” The non-bruised side of his face lifted into a wry smile.
I flushed. No one had ever called me “hot” before. My best friends were a bunch of guys, and they treated me like one of the boys. Then again, “hot” wasn’t exactly a compliment in my book. It usually meant “bang-able,” not exactly something a respectable girl wanted to be called.
“So what do you think?” he asked softly.
“No.”
“No?”
I firmly shook my head. “No way. Not in your wildest dreams.”
The look on his face said he clearly wasn’t used to being blown off. His eyes held mine as he reached up to cradle my cheek. “Then I guess I’ll have to change your mind.”
I swatted his hand away and turned around before he could see me blush anymore. He chuckled, and I was afraid he’d push the topic, but a few seconds later I heard the door close.
My heart beat wildly. What was the matter with me? This was the guy who ruined my life, so shouldn’t I hate him? I tried to make sense of my feelings.
“All right, sure,” I said to myself, pacing. “You’re attracted to him. It’s perfectly natural. He’s handsome, he’s surprisingly sweet, he’s…”
He had been very kind to me, which was the exact opposite of the picture the government and my memories had painted for us. Vampires should be wild, feral creatures whose sole purpose was to prey on humans. But Aden and his mother, Paris, Rook and Angel, this place… they seemed normal, almost human, with the exception of the charming General Frost.
I groaned and rubbed my eyes, more confused than when I’d started.