The Summer of No Regrets Blog Tour! 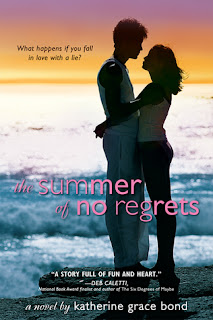 This was the summer that would change my life.
No more being what everyone expected. No more doing what everyone else wanted.
So when Luke came into my life, I decided to keep him a secret. Maybe he as a dead-ringer for notorious Hollywood bad boy Trent Yves. And it was possible that everything he told me was a lie. And yes, I was probably asking for trouble. But all I saw was Luke–sweet, funny, caring–someone who would let me be the real me.
But which was the real him?

If you liked The Summer of No Regrets, you will like Luke’s Journal, where Luke gets to have his say. Where did he go the times he disappeared? What was he really going through at home? The book is available as a .99 download from July 18-29 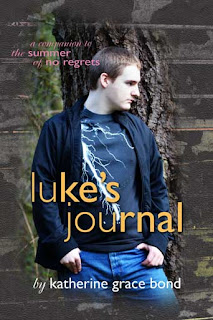 Favorite Chocolates
Dark with something crunchy in them and a hint of mint or orange.

Favorite books that inspired you to write
Childhood: Winnie the Pooh, Ramona the Pest, A Wrinkle in Time, A Little Princess
Teens: Saturday, the Twelfth of October, The Last Unicorn, Oliver Twist, A Midsummer Night’s Dream (not really a book, but a story.)
Adulthood: To Kill a Mockingbird, The Secret Life of Bees, The Artist’s Way, The Chosen

Favorite songs to listen to while writing
I wish I could listen to music while writing, but I love it too much and I can’t concentrate on my writing. If I listen to anything while writing, it’s white noise or ocean waves or a thunderstorm I have that is awesome.

Favorite destination to live?
I love the Pacific Northwest, where I live. This is home. But I’d love to live in France or Ireland for a while.

Favorite movie moments
Every one of these is a scene in which a character’s true self is suddenly revealed in a way that makes him vulnerable.
In Spiderman, (can’t remember which one), when Tobey McGuire (Peter Parker) is lifting that huge wall to save Kirsten Dunst (Mary Jane). With his mask gone she is seeing who he is for the first time. In a breathless voice he says, “Hi.” Mary Jane stares at him and he adds, “This is really heavy.”
In Seven Years in Tibet when the young Dalai Lama wakes up with a nightmare and is comforted by the formerly arrogant young mountain climber who has fled there for protection.
In Billy Elliott when Billy is standing in front of the expressionless committee who will judge his dancing and decide whether he is worthy to enter their elite training program. He is paralyzed by their grim faces, but then slowly begins to dance, then picks up speed, then enters completely into the moment in a joyful burst.

Favorite Super Villain
Not exactly a super villain, but:  Gollum.

Thanks for joining us in The Summer of No Regrets Blog Tour!
We hope your enjoyed your stop here at Sassy Book Lovers!
Posted by Renee Booth at 6:00 AM