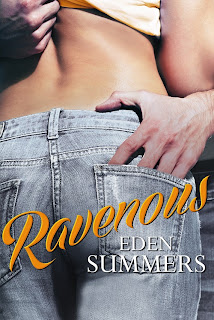 She’s a small town caterer, he’s a big city chef, but they don’t need a kitchen to make things sizzle...
Erin McDonald likes her simple life in her small town: no drama, no fuss, no uncertainty...until Jesse Hackett breezes back into town. Erin never quite got over how he left for the bright lights of the big city, and took her heart with him.Jesse never regretted his decision to leave small town life behind and chase his big city dreams, but he’s always regretted leaving Erin behind. No woman has ever compared, and once he convinces Erin to let him touch her again, he’s never going to let her go.
Sparks fly and fires are rekindled, but the basic divide still remains: what really matters in life — location or love?

Add it to your Goodreads TBR

Excerpt
“What do you want?” She tried to appear nonchalant, even though her body already started to betray her. Her breasts tightened and her knees grew weak.
“What’s on offer?” His lips parted in a full smile.
Erin let out a sigh. She didn’t have time for this, and after eight years she still didn’t have the strength for it. Jesse was her downfall, her Achilles heel and the reason for every single relationship failure since he left town, taking her broken heart with him.
“You’re licking your lips as if you still want me.”
She opened her mouth to protest and closed it again. He was right. She had been licking her lips.
Bastard.
“And you’re dripping,” he added.
“Now that’s enough!” There may have been heat between her thighs but she sure as hell wasn’t “dripping”. Jesse had been the first to touch her, the first to teach her the ways of lovemaking and dominant desire, but he sure as shit wouldn’t be able to tell that her panties were damp.
“I meant your spoon,” he chuckled, indicating the piece of silver hanging from her hand, “it’s dripping on the floor.”