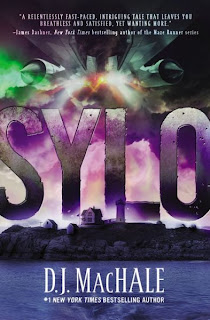 ﻿Does Tucker Pierce have what it takes to be a hero when the U.S. military quarantines his island?

Fourteen-year-old Tucker Pierce prefers to fly under the radar. He’s used to navigating around summer tourists in his hometown on idyllic Pemberwick Island, Maine. He’s content to sit on the sidelines as a backup player on the high school football team. And though his best friend Quinn tells him to “go for it,” he’s too chicken to ask Tori Sleeper on a date. There’s always tomorrow, he figures. Then Pemberwick Island is invaded by a mysterious branch of the U.S. military called SYLO. And sitting on the sidelines is no longer an option for Tucker, because tomorrow may never come.

It’s up to Tucker, Quinn, and Tori to uncover the truth about the singing aircraft that appears only at night—and the stranger named Feit who’s pushing a red crystal he calls the Ruby that brings unique powers to all who take it. Tucker and his friends must rescue not just Pemberwick Island, but the fate of the world—and all before tomorrow is too late.

D.J. MacHale is a writer, director, executive producer and creator of several popular television series and movies. As an author, his ten-volume book series: PENDRAGON – JOURNAL OF AN ADVENTURE THROUGH TIME AND SPACE became a New York Times #1 bestseller.


He was raised in Greenwich, CT and graduated from Greenwich High School. While in school, he had several jobs including collecting eggs at a poultry farm, engraving trophies and washing dishes in a steakhouse…in between playing football and running track. D.J. attended New York University where he received a BFA in film production.


His filmmaking career began in New York where he worked as a freelance writer/director making corporate videos and television commercials. He also taught photography and film production.


D.J. broke into the entertainment business by writing several ABC AFTERSCHOOL SPECIALS. As co-creator of the popular Nickelodeon series: ARE YOU AFRAID OF THE DARK?, he produced all 91 episodes over 8 years. D.J. also wrote and directed the movieTOWER OF TERROR for ABC’s WONDERFUL WORLD OF DISNEY which starred Kirsten Dunst and Steve


Guttenberg. The Showtime series CHRIS CROSS was co-created, written and produced by D.J. It received the CableAce award for Best Youth Series.


Other notable writing credits include the ABC AFTERSCHOOL SPECIAL titled SEASONAL DIFFERENCES; the pilot for the long-running PBS/CBS series GHOSTWRITER; and the HBO series ENCYCLOPEDIA BROWN, BOY DETECTIVE for which he received a CableAce nomination for writing.


In print, D.J. has co-written the book THE TALE OF THE NIGHTLY NEIGHBORS, based on his own teleplay and penned the poetic adaptation of the classic Norwegian folk tale EAST OF THE SUN AND WEST OF THE MOON. His most current work is the spooky MORPHEUS ROAD trilogy; and a whimsical picture book THE MONSTER PRINCESS.


D.J. lives in Southern California with his wife Evangeline and daughter Keaton. They are avid backpackers, scuba divers and skiers. Rounding out the household are two elderly goldfish and a Kitten, Kaboodle.
Website

Top 10 Favorite Things with D.J.
Favorite author (dead or alive)?
Ian Fleming.
Favorite Chocolates?
Anything that isn’t white.  That’s not real chocolate.
Favorite books that inspired you to write?
The Catcher in the Rye; anything by Ian Fleming or Alistair McLean.
Favorite songs to listen to while writing?
The Sounds of Silence…literally.  Not the S&G song.
Favorite destination to live?
Wherever my two girls are.
Musicians/bands/groups?
The Beatles.  Always.
Favorite movies of all time?
The Guns of Navarone.
Favorite TV program/series?
Are You Afraid of the Dark?  (Because I made it)
Favorite movie moments?
Way, way too many to name.
Favorite Super Villain?
Goldfinger.  He had an ingenious plan and a great theme song.
Favorite gadgets?
My altimeter/watch; a wire cranium-massager; my three Swiss Army Knives.
Favorite dream destinations?
I’d love to dive the Great Barrier Reef.


Click HERE to see where your next stop is.
Posted by Stacey at 3:44 AM