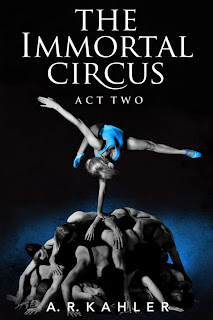 Vivienne is almost content with her new life in the Cirque des Immortels. She has moved up from selling cotton candy to telling fortunes, she has a gorgeous, magical boyfriend, Kingston…and no one has been murdered since the clash between the otherworldly Courts. Her life under the faerie big top would be perfect, in fact, if not for the nightmares and visions that compel her to seek and confront her half-remembered past. But for Viv, not knowing her past may well be a blessing. There’s a reason she ran away. But can she truly escape herself?.
The second act of the fantastically evocative Cirque des Immortels series, The Immortal Circus: Act Two draws readers further into a world that’s at once wonderful, seductive…and deadly.
Step right up… 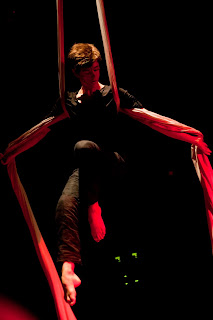 Alex is many things, but first and foremost, he’s a Sagittarius.
In the past few years he’s taught circus in Amsterdam and Madrid, gotten madly lost in the Scottish wilderness, received his Masters in Creative Writing from Glasgow University, drummed with Norse shamans, and even spent a few months as the assistant to Holly Black and Cassandra Clare.
THE IMMORTAL CIRCUS, book one in his Cirque des Immortels series, is now available from 47North. ACT TWO will be released June 11, 2013.
MARTYR, the first book in his post-apocalyptic YA fantasy series, THE HUNTED, is set to be published October 28, 2014 by Spencer Hill Press.
When he’s not writing or climbing in the rafters, he’s probably outside, staring at the clouds. And seeing as he now resides in Seattle, there are clouds aplenty.