THE SEEN TRILOGY
He Watches Me, He Touches Me, He Claims Me
By: Cynthia Sax

Tokens Of His Love

When a man loves a woman (or a man loves a man or a man loves an alien or… - grins), he often gives her gifts, tokens of the feelings he might not be able to express with words. These gifts could be giant teddy bears wearing pink bowties, two blood red roses symbolizing the two of them, or a diamond engagement ring.

My dear, wonderful hubby is no exception. He's given me many gifts over the twenty fabulous years we've been together. One of my favorite gifts was given early in our relationship.
My hubby has a policy to bring me flowers whenever he was late, and as he lives his life on Guyanese time, he's almost always late. I accepted this small fault when I met him. He was a half hour late for our first date.

One day, the hubby presented me with a gold flower-shaped pendant, telling me he wanted to ensure I always have a flower. Yes, my heart melted. I love this little pendant and I always wear it. I consider it my good luck charm. When we're apart and I think of him, I touch the delicate petals.

Years later, I found out that my mother-in-law had given the pendant to my hubby to pass along to his future special someone. When I finally met my mother-in-law, I was wearing the pendant and she knew immediately who I was to him. This gift meant a lot to me but it meant even more to my hubby. It was a declaration to himself and to the world that I was his.

Blaine, the hero of He Watches Me, gives Anna, his backyard exhibitionist, a gift also. He threads a black ribbon through an intricate gold key and hangs it around Anna's neck. This gold key opens one of the gates to his backyard sanctuary, a place the enigmatic billionaire keeps very private. By giving her the key, he's not only granting her access to his home but to his private life also. He's opening up to her, trusting her.

As Anna hasn't received many gifts in her harsh lonely life, she especially treasures this gift, removing Blaine's gold key only when she showers, bathes, or skinny dips in his pool. Often this makeshift pendant will be the only thing Anna wears and when she's scared or lonely or thinking of Blaine, she'll touch it.

What are some of your favorite gifts and why do you treasure them?

He Watches Me
(Seen Trilogy, #1)
by Cynthia Sax 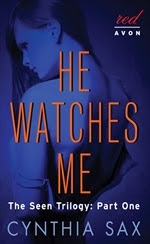 She desires to be seen. He wants to watch.Anna Sampson has a naughty secret. Every night, she slips into her neighbor’s yard and swims naked in his pool. She fantasizes that the dynamic young billionaire watches her nightly nude aquatics, his brilliant green eyes gleaming with lust.She discovers this isn’t pure fantasy. Gabriel Blaine has been watching her via his security cameras, and now that he has returned to L.A., he doesn’t plan to stop. That’s all he wants—to watch. Anna knows she shouldn’t allow him and she certainly shouldn’t want more, but she craves Blaine’s attention, needing his gaze fixed on her body.
ADD ON GOODREADS
BUY LINKS
Amazon | B&N 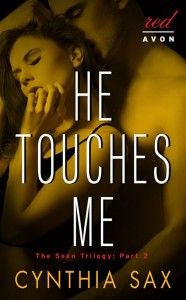 His touch enflames her desires.Anna Sampson has allowed billionaire businessman Gabriel Blaine to watch her, all of her. And looking is all he’s done—until now. After giving him permission to touch her, Anna realizes she won’t be satisfied until she has all of this handsome and secretive man.Soon she tempts him, shreds his control, and pushes him too far. Blaine’s reluctance to take her virginity frustrates Anna. He fulfills her fantasy, but what is their reality together?
ADD ON GOODREADS
BUY LINKS
Amazon | B&N 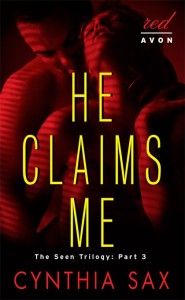 A billionaire’s desires and a virgin’s wish to be claimed come together.Two men want Anna Sampson. Gabriel Blaine is powerful, intelligent, the CEO of a successful company, and a billionaire. He’s watched her, touched her, encouraged her to become a strong, independent woman, a woman unafraid of her desires.Now secrets from the past are exposed, threatening Anna’s freedom and safety. Will the man she loves stand by her side, or will he desert her, leaving Anna once again to face the future alone?The searing climax of The Seen Trilogy.
ADD ON GOODREADS
BUY LINKS
Amazon | B&N

Author Info
Cynthia Sax lives in a world filled with magic and romance. Although her heroes may not always say, “I love you”, they will do anything for the women they adore. They live passionately. They play hard. They love the same women forever.Cynthia has loved the same wonderful man forever. Her supportive hubby offers himself up to the joys and pains of research, while they travel the world together, meeting fascinating people and finding inspiration in exotic places such as Istanbul, Bali, and Chicago.Please visit her on the web at www.CynthiaSax.com