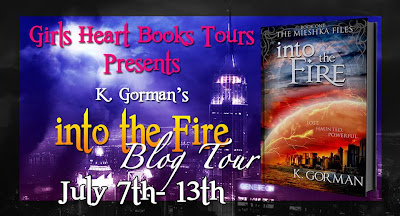 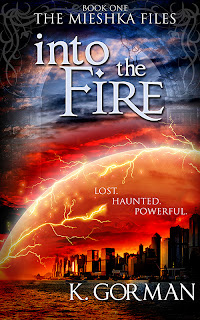 
Secure under its Mage-powered shield, Lyarne ignores the war that has taken the rest of the country.


Inside its borders, refugees are first pitied, then assimilated.


Mieshka knows this well. Coping with the loss of her mother and the grief of her father, she keeps her head down at school and maintains a neutral stance with her new Lyarnese friend.


Things change when she meets the Fire Mage. There's a lot more to this city—and herself—than she could imagine.

Meese had missed first period, and wasn’t responding to Robin’s texts.
Robin cradled her forehead in her palm, fingers edging under her beanie. Around her, a steady, hushed conversation filled the room. The classroom’s fluorescents strained her eyes. Robin sat sideways at the too-small desk, feeling the chair’s wooden back jab into her ribs. Her phone rested on her thigh, safely hidden behind the desktop. Staring absently at its screen, Robin overheard a few snippets of gossip:
“—Really? Ben and Jessica? Have they, y’know, done it?”
“—got her wallet stolen.”
“Devil Bitch Murphy is on phone-conquest again.”
She looked up at the last, spotting Mrs. Murphy at the front of class, erasing the chalkboard. Robin's hand curled protectively over her phone. The teacher’s confiscating habit had earned her a few nasty nicknames over the years.
Robin rubbed at her eyes. They felt dry and itchy.
By the front window, Mrs. Murphy’s taxidermic Cooper’s hawk reeled on its wire, dead wings outstretched. It lorded over a shelving unit filled with animal skulls, textbooks, and wilted plants. Robin watched as the bird slowed its spiral, pausing for a second to consider escaping through the window. Drafts pushed it into an opposite spin.
She swiped her phone’s screen before it timed out.
Meese was a lot more fragile than she let on. Robin had learned that yesterday, though she’d long suspected it. Perhaps both of them had been content to pretend that wasn’t the case. Pretending was good. There had been some good times.
But pretending was a thin way to live. Something grated in Robin’s head. She suspected things might not be all right.
How could she have been so stupid? Of course the ‘temple’ was a memorial. How hadn’t she seen that? After Meese had pointed it out, it seemed obvious.
Of course it was a memorial. All those burning words on the wall? Those were names. A lot of names.
Meese had seemed oddly at ease with it. Yesterday, they’d parted ways on good terms, with a promise of eating lunch together today. Meese had even smiled.
Missing class was very un-Meese-like.
Had something happened?
Robin’s eyes wandered away from her phone again, sliding along the projects and posters that crammed the classroom. The periodic table curled away from the wall behind a TV set that was probably older than her dad.
“Oh great, career day.”
Robin jerked her attention back to the front.
On Meese’s behalf, she stiffened.
A woman had entered in full military dress uniform, although she had elected for the pencil skirt as opposed to the slacks. Medals glinted on her left breast. Her bright blonde hair was pulled back into a tight bun under the black-rimmed red beret she wore. She carried a large, long bag in one hand, clutching a small purse in the other. As Robin watched, she put both on the front table and, laughing with Mrs. Murphy, began to set up for a presentation.
Quickly, Robin turned back to her phone and opened a new message. Meese hadn’t replied to her other messages, but there was no harm in trying.
Don’t come to class.
She hit send, sliding the phone further up her thigh. Glancing between the officer and the classroom’s door, tension gripped her shoulders. The room felt colder. The hawk slipped to a stop for another moment, its glass eyes on her. Then its gyre moved on. She huddled further into her hoodie—the same one from yesterday—and sank into the seat.
The bell rang. On its tail, Meese walked into the room.
She faltered a few strides in, locking on the officer. For a moment, Meese froze. It took visible effort to thaw and walk to her seat. Meese slid her backpack down to the floor. Robin relaxed as Meese sat and began to unpack her binder and textbooks. Her fingers were still red with cold.
The officer pulled a large rifle out of the bag.
Meese’s hand froze in mid-air. As the officer propped the rifle in a stand, that hand went to the edge of the desk. Tendons tightened over Meese’s knuckles, turning the skin white. A few seconds passed. Then, with another great effort, Meese relaxed enough to release the desk.
She began to repack her bag.
The officer turned around with a bright smile and a salute.
“How’s everyone today?”
The smile faltered as Meese stood up, drew her hood over her orange hair, shrugged on her pack, and turned toward the classroom’s back. For the first time that day, Robin saw her face. Meese’s skin was blotchy. Robin met her eyes for a moment. They were dry and dark. Meese’s mouth was a hard line.
The moment passed as Meese walked by the last of the desks. The class heard the back door open, then close.
The officer stood at the front, her mouth open. Her beret had a coquettish tilt. She stared at the door, blinked once, and refocused on the class.
“I guess she won’t be joining the army then, eh?”
No one laughed. The silence was a stoicism Robin had learned early on in school: shut up, keep your head down, and you’ll get through till the final bell.
Unfazed, the officer continued:
“Did everyone see that bomb yesterday?”
Yeah. It was probably a good thing Meese had left.
Robin’s phone buzzed loudly against her thigh. Some of her peers looked around as she clamped it against her jeans, hurriedly swiping at the screen. The hawk swept its gaze past her. Mrs. Murphy had gotten up to turn off the lights.
She looked at the message.
Thanks. Why is she here?
She glanced at the officer again, who had reeled the TV set to the middle of the classroom.
‘Career Presentation’, Robin replied, careful to put the quotation marks in. Meese would appreciate that.
A small, polite cough made her look up. Mrs. Murphy’s keen eyes looked down on her.
“Your phone, Ms. Smith.”

After a year spent living in South-West China, K. Gorman has returned to her life as a university student in Western Canada. During high school, she spent her days ignoring classwork to focus on reading or writing. She has been a voracious consumer of Fantasy and Science Fiction for as long as she can remember. When not reading or writing, she moonlights as a horse-drawn carriage driver, combining her love of history with her long-time passion of working with horses.