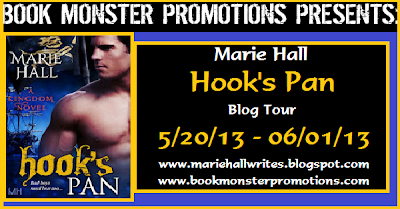 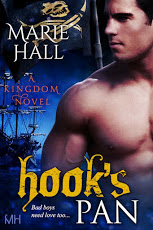 Trishelle Page has known pain in her life, but instead of it making her weak, she's stronger. Confident. That is until the day a fairy kidnaps her during her starring role in Peter Pan's play and tells her not only do fairy tales exist, but that she's the soulmate of the pirate they call Hook, making her question everything she ever thought she knew.Captain James Hook is a man at the end of his rope. He's not the villainous bastard tales have made him out to be. So when the curvaceous blonde drops literally at his feet, he aims to prove it to her. If only to get her into his bed.What neither one knows is that fate and magic are conspiring and they can deny the attraction all they want but their happily ever after is already written, it's just a matter of getting there.

Marie Hall has always had a dangerous fascination for creatures that go bump in the night. And mermaids. And of course fairies. Trolls. Unicorns. Shapeshifters. Vampires. Scottish brogues. Kilts. Beefy arms. Ummm... Bad boys! Especially the sexy ones.


On top of that she’s a confirmed foodie, she nearly went to culinary school and then figured out she could save a ton of money if she just watched food shows religiously! She’s a self-proclaimed master chef, certified deep sea dolphin trainer, finder of leprechaun’s gold at the end of the rainbow, and rumor has it she keeps the Troll King locked away in her basement. All of which is untrue, however, she does have an incredibly active imagination and loves to share her crazy thoughts with the world!

5/27- Curse of the Bibliophile
http://curseofthebibliophile.blogspot.com/

5/30- Because Reading Is Better
http://love2readalways.blogspot.com/

6/01- Confessions of the Paranormal
http://confessionsoftheparanormal.blogspot.com/