Review- The Rules of Conception by Angela Lawrence 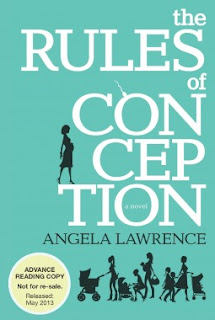 Blurb- Rachel Richards is ready to be a mother. She’s got a great job, a good income, a beautiful inner-city apartment, and a great group of supportive friends. All she needs is a father.
But go-getter Rachel won’t let a little thing like that get in the way of her dreams. After investigating different options to become pregnant, co-parenting, adoption and anonymous sperm donors, Rachel finally settles on a method of conception – using a known donor. Making the decision to choose the biological father for her child, Rachel picks Digby. The single, softly-spoken Canadian with a complicated family background wants to have children, but not have a child.

After a few attempts, Rachel is able to conceive and begins to dream about the kind of life she will create for her and her child. But the well-established foundation for her dream soon begins to develop cracks. Lyndall, her nightmare boss, is becoming even more obsessed with ruining Rachel’s career, a desirable, but undeniably married, colleague is beginning to show inappropriate interest and the stress of her impending new life is starting to take its toll on Rachel’s health.

Review- The blurb pretty much sums up the entire book, so here is my opinion. Although I feel that the storyline was unique, original and clever, it could have been delivered better. As a result of the writing skills, I found that the majority of the book was slow and dragged a bit and I quite often felt myself getting bored. Once I did get to the end of the book it felt rushed. It kind of felt like the author put so much time in trying to make the book longer that when she got to the end it had to be quick.

I do however applaud the concept and the direction in which the author was trying to go with her story. Also bringing forth a topic that is becoming quite popular in the modern world we live on but not often talked about.

I somewhat enjoyed the characters but didn't form that connection that all readers like to get when reading a good book. I like depth to stories and while some will enjoy the lightness of The Rules of Conception, it just wasn't for me.


You can find The Rules of Conception in all major book stores and stockists around Australia or follow these links for online purchasing:
AMAZON
BOOKTOPIA

Thanks for checking out my latest review :)