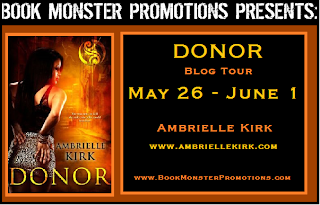 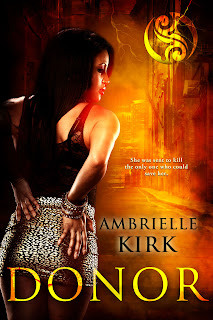 ﻿
﻿
Elaina was once a tracker of Dresdan, an ancient species of vampire. For years, she served District 5, whose prime agenda is to create a new race of humans. As a result of misguided politics and greed, the District becomes corrupted from the inside out. Before Elaina can expose the truth, District 5 discovers that her blood type contains the elements to create a successful hybrid. She becomes the hunted, but protection is found while in the presence of one vampire…


Vicq won’t rest until he destroys District 5 and their immoral experiments are halted. Too many Dresdan have been captured and exterminated, threatening their existence and painting them all as animals. As he plans his attack against District 5, master vampire Russo orders his death for violating a prime law of Dresdan. But Vicq is not ready to cease existing…especially since he’s found salvation with Elaina.
With very few on their side, Elaina and Vicq must cultivate a plan to ward off their enemies. In the process, they find lust, love, and new meaning to their special bond.


*This title was previously published, but has been extensively revised and re-edited and includes new and extended scenes.*


Available at:
Amazon | B&N | All Romance eBooks
Add to your Goodreads List

DONOR Excerpt
When Elaina spun around, the next events happened like flash animation in rapid succession right before her eyes.
The Dresdan caught the humans by surprise, rushing up behind them and grabbing them both by the throat. They were stunned and—like her—unprepared for this ravenous predator.
Just as she was about to make a break for it, a gun fell from one of the victims' hands and skidded across the pavement. The other man gripped a rope. Had these two actually been pursuing her?
She scurried backwards nearly tripping over her own feet, yet her eyes would not leave the scene.
The vampire must have held them in a death vice. All she saw were the whites of their eyes, and a large dark shadow behind them. The creature honed in and struck the first victim in the jugular, sucking the life right out of him. The second victim's arms and legs began to shake and then he was completely still.
Damn. The Dresdan had drained one while choking the other.
It tossed their limp carcasses in the grass along the sidewalk. From deep behind the shadows, he eyed her—the main course. Deep crimson eyes burned bright like fire. The ends of the trench coat it wore fanned outward with the breeze. It was moving toward her.
Her legs finally obeyed and she fled, the wind whipping across her ankles as if urging her to hurry. She shrugged off her long pea coat in an attempt to run faster. Her heels knocked the pavement, echoing against the stone walls.
Every day she parked on the same level, but tonight it seemed like she had to cross mountains to get to her SUV. Taking the elevator was not an option, of course. Standing still for even one second would be disastrous.
Elaina heard the familiar swooshing sound the Dresdan made just before they shifted from one place to the next. The sound was closer than before. He was gaining in on her.
Her heart pumped frantically and her lungs burned from exertion. She picked up pace, pushing herself to reach her destination. Her Tahoe sat in the corner. The last one on the right within what was now a desolate parking garage. If she died tonight by the hands of a vampire, it was likely that no one would find her body until morning when it was cold and rigid with death.
The moment she thought she'd reached her SUV successfully, the Dresdan unfolded in front of her, blocking her path. He was huge, and her eyes leveled with the lower portion of his chest.
Before she could raise her gaze higher to confirm, he reached for her. He grasped her by the waist and lifted her off her feet. She opened her mouth to scream, but a gloved hand clasped over her lips.
Elaina kicked her feet, connecting sharp-heeled pumps to her captor's shins. She might as well have been fighting with a sumo wrestler. His grip was firm. Her cries were muffled by his grainy leather glove and she focused on wriggling out of his grasp. No mistaking what he was now. The spicy ancient aroma gave him away.
Dresdan, for sure.
Her captor lowered her heels to the pavement and his massive frame pushed her back into the metal pole behind her. The hard beam felt alien digging against her spine. Her eyes turned left and right looking for a savior. Someone. Anyone. Still, he pressed his palm to her mouth, preventing her speech. The SUV was only a few feet away, but she'd failed to reach it.
Elaina strained to peer up at him, but the height of her captor prevented this. Only the black shirt stretched over his taut chest muscles could be seen from her line of sight. He bent down further so close that his chin touched her forehead, and then he inhaled deeply.
Oh, my God. She would die. Tonight.
"When I let my hand up, you keep your trap shut," her captor hissed into the side of her face.
She sucked in another breath and clasped her fingers onto the chilly metal behind her. Her heart drummed like the consistent cadence of a marching band. Dammit, she was stronger than this! Had she turned into a wimp after all this time?
"You got that?" it demanded when she didn't answer.
She squeezed her eyes shut and nodded her head.
"You scream...we'll both be executed."
His harsh warning tone frightened her, but she bounced her head in agreement once again.
Executed? Those were the only words that registered.
He straightened his posture and slowly lifted his hand from her mouth. She parted her lips, taking a gulp of fresh air. It burned her lungs as she recovered from lack of oxygen.
Gradually, she lifted her chin, then her eyes to identify the brute. Red glowing orbs glared down at her. The rest of him—a black shadow in the night.
On her next exhale, she released a belated scream. 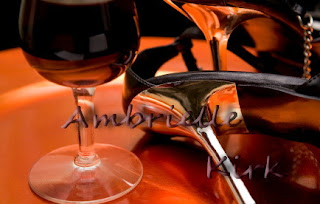 Multi-published author Ambrielle Kirk writes erotic, paranormal romance, and urban fantasy. Ambrielle lives in Atlanta, GA where she works in the accounting and finance industry. She holds a Master's Degree in Accounting. Since graduation she's worked in the public and private accounting sectors. She is the wife of a loving husband, and the mother of a beautiful girl. She works and writes full-time. A bestselling author in several sub-genres at ARe and Amazon, she has also earned a 2012 Swirl Award in the paranormal category. She's a PAN member of RWA, FF&P special interest chapter of RWA, and co-founder and treasurer of Cultural, Interracial, and Multicultural special interest chapter of RWA. Ambrielle Kirk is also an admin at the blog, IRMC Books.


Grand Prize:
$25 egiftcard to Amazon and an eBook copy of Donor
Runner ups:
5 winners will receive an eBook of Donor

If you've missed any stops or want to visit past or future stops, here's the schedule..
Ambrielle Kirk's DONOR Book Blast Tour
May 26 - June 1

May 28:
Close Encounters with the Night Kind
http://closeencounterswiththenightkind.blogspot.com/

May 29:
Regina May Ross
http://www.reginamayross.net/blog.html

Confessions of the Paranormal
http://confessionsoftheparanormal.blogspot.com/