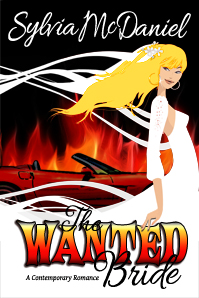 She’s a Runaway Bride
Valerie Burrows is running from a wedding, her attorney fiancé and the law. Pampered Valerie takes a bus to nowheresville, where she learns her cash and credit cards have been stolen. Left with only her designer clothes and luggage she takes on a new identity and must learn to be self-reliant. She swears off men, especially attorneys, only to find the one man who refuses a one night stand and wants a relationship.


He’s Looking For A Wife
Matt Jordan, the Colorado Crusher, is the most successful liability lawyer in the state. After the death of his brother-in-law, he realizes he’s ready to settle down with a family of his own. His only requirements are intelligent, great-looking, wants more than a hook-up and doesn’t lie. After witnessing the lies his father told his mother, he demands complete honesty. Yet Valerie Brown shows him sometimes in order to find yourself, you must become someone else. Even if that means lying.
ADD ON GOODREADS


Sylvia McDaniel is a best-selling, award-winning author of historical and contemporary romances. Known for her sweet, funny, family-oriented romances, Sylvia is the author of The Burnett Brides a historical western series, The Cuvier Widows, a Louisiana historical series, and several short contemporary romances.
President of the Dallas Area Romance Authors, a member of the Romance Writers of America®, and a member of Novelists Inc, her novel, A Hero’s Heart was a 1996 Golden Heart Finalist. Several other books have placed or won in the San Antonio Romance Authors Contest, LERA Contest, and was a Golden Network Finalist.
Married for nearly twenty years to her best friend, they have two dachshunds that are beyond spoiled. She loves gardening, shopping, knitting and football, but not necessarily in that order.
Currently she’s written fifteen novels and is hard at work on number sixteen, a Christmas Novella about the Burnett Family. Look for her the first Tuesday of every month at the Plotting Princesses blogspot http://plottingprincesses.blogspot.com/ and twice a week at her own blog Downward Dog Diva With Sass http://sylviamcdaniela.blogspot.com/ . She can be found online at: www.sylviamcdaniel.com or https://www.facebook.com/SylviaMcDanielAuthor.


Valerie stepped off the bus in the small town of Springtown, Colorado. Population 294. Salute!
In Amarillo she’d bought a ticket to Denver and pitched her wedding gown in the trash. After sitting beside a drug dealer all the way to Albuquerque, being proposed to by a parolee on
the way to Santa Fe, and awakening to an elderly woman riffling through her Louis Vuitton carry-on, it was time to ditch public transportation. She’d take a taxi to the nearest car rental
place and continue her journey in her own set of wheels.


The air brakes hissed as the driver released them, and the bus pulled away from the depot, which consisted of a bench in front of a café. The cold wind whipped right through her thin
clothes as she stood alone on the street. She pushed open the door to the small diner. A “Help
Wanted” sign banged against the glass. The greasy spoon was filled to capacity in the late evening, but suddenly her stomach growled, reminding her the Snickers bar she’d eaten in
Albuquerque was not a five-course meal.


The café grew quiet as Valerie pulled her luggage across the wooden floor, the wheels thump, thump, thumping. She sat down, sighing in relief, and the chatter resumed. She desperately needed a latte grande. A woman with stained white sneakers and a food splattered
dress stopped at her booth.


“I’d like eggs Benedict with a skim, no whip, pumpkin spice latte. Make it a grande.”


The waitress glanced at her matching luggage. “Honey, I think you must have missed your bus stop. This here is Springtown, not Vail. I’m not Martha Stewart, and I don’t do lattes.”


Valerie frowned and bit back the quick retort that sprang to her lips. Had the woman never heard of Starbucks? “What do you have?” she asked, wondering if the bus had dropped her off on Mars, or if she was starring in her own personal Twilight Zone episode.


“I’d suggest you start there,” the waitress said.


“Give me two eggs over easy, with coffee.” Valerie replied.


“Do you have any hazelnut cream to go in the coffee?”
“Here in Springtown our cows don’t produce flavors.” She pushed her pen back behind her ear. “My name is Fran if you need anything else.”


The waitress hurried off. Valerie gazed around the café and noticed the sheriff and a guy whose dark looks would normally have taken her breath away occupied a booth across the room.
However, in the last forty-eight hours she’d sworn off men. Today her heart pounded a little harder, but only because the sheriff sat across from the tall, dark, handsome man. Surely two
states away no one would be searching for her. Yet.


With the number of criminals loose in this world, why would law enforcement be interested in a good girl with a temporary case of wedding insanity from Dallas? Her crime was minor
compared to the act of her two best friends. Or since they’d betrayed her, were they really her friends?