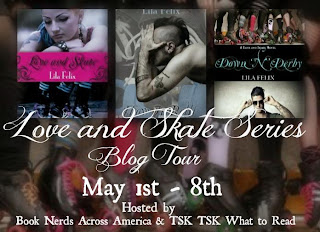 Welcome to our stop on the Love & Skate series blog tour.
Love And Skate
(Love and Skate #1)
by Lila Felix
Published: 9th November 2012 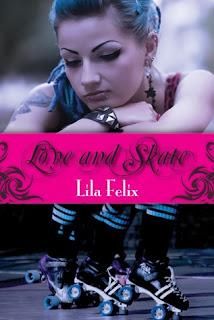 ﻿
On the rink she’s tough, she’s a leader, she’s fast and she’s the epitome of a rebellious girl. But Nellie’s been hurt, only once, but it was enough to make her look at life through different eyes and off the rink she’s a timid girl who loves with no pretenses.A long time ago Owen Black was betrayed by the girl he thought he loved and the guy he called his best friend. The anguish set off a domino effect of negativity in his life and he never has fully recovered. He meets Nellie Forrester and thinks he can let it go for her. But how can you love someone when the wounds from your past are still wide open?
ADD ON GOODREADS
BUY LINK
Amazon
How It Rolls
(Love and Skate #2)
Published: 11th February 2013

Despite the odds, Reed Wolfe is making it, by the skin of her teeth. Her dreams and aspirations will have to wait until she can get on her feet. Because right now she’s homeless and churning on a downward spiral. Falcon Black is existing. Not living, not thriving, just jutting along a path. But when he finds Reed, he can’t resist the urge to help her, lighten her load. But Falcon tends to go overboard, over the line, crossing boundaries he never thought he would and risking her trust in the process. Can she accept his love or will it end up smothering her? 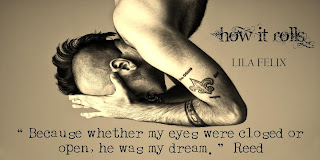 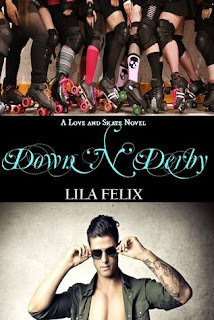 Maddox is running. By accident, he discovered long ago that he was adopted as a baby and his need to find his biological father has consumed him ever since. Now, on a road trip, determined to find his father and his sanity, and armed with locations and his cousin, Nixon, to help him, maybe he can find the answers he’s been searching for. With nothing but a suitcase and a wad of cash to get him there, lead after lead takes him further from home.But he’ll find much more than he intended.He finds Storey, a pint sized pin-up model who has learned painful lessons about guys. Her wounds run deep, but so do his. She knows what she wants, but will she recognize it when it’s right in front of her?Maddox can’t touch anyone without feeling like his skin is crawling, but just maybe his instinct to protect this amazing girl will supersede his own hang-ups. If he can brush her skin and start to feel alive inside...everything will change. 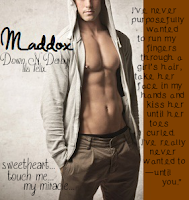 ADD ON GOODREADS
BUY LINK
Amazon
About the author
Lila Felix made the decision to write a book after being encouraged by friends. She is a stay at home mom to three wild children and three boisterous dogs. Between writing books she loves read and watch sappy 80's movies. Favorite things: ice cream, anything purple, roller derby and any kind of music she can get her hands on. If you're looking for her, try looking under Cypress trees in the swamps of Louisiana.
Stalk her at:
Facebook | Twitter | Goodreads | Amazon
Giveaway


Prize #1: Love and Skate, How It Roll and Down N Derby ebook from Amazon
Prize #2: $50 Gift Card from Amazon