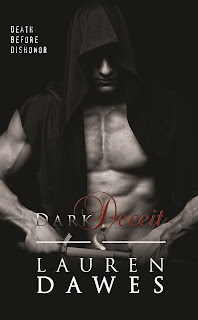 The time of the Aesir gods is over. Now they live among the humans in their bustling modern cities. Their brutal dominion over the gods and humans may have ended, but their actions have not been forgotten.


Korvain is feared like no other. His ruthlessness and cold heart are legendary, but when he is given the task of killing one of the most fabled goddesses of all time, he is left with an undeniable desire to make her his own. Failure in his task means only one thing: death. Will he follow his orders, or will he follow his heart?


Bryn’s whole world crumbled when she left Odin’s service to protect the other Valkyries. Now living with the humans, she is the only thing standing between them and total destruction. But her beliefs are about to be shaken to the core when she meets Korvain—a completely irresistible Mare who threatens to take away more than just her innocence.

Dark Deceit Excerpt/Teaser:
Stepping past one of the only humans she actually liked, Bryn opened up her office door and stopped dead when all the air came rushing out of her lungs.
Korvain was sitting on the edge of her desk, his black eyes glittering in the overhead lights. Although he was sitting down, she could tell he was taller than her by more than just a few inches. His skull-trimmed hair was black, matching his eyes and the dark slashes of his eyebrows.
He was bigger than any other male she had ever seen. His arms were as big as her thighs, crossed tightly across a stomach so well defined the muscles of his abdominals threw their own shadows from under the material of his shirt.
Her eyes took in the breadth of his shoulders, the size of his chest. Bryn swayed suddenly, her hand shooting out to catch the door jamb to keep her balance. Gods, the scent of the male was intoxicating. She had a sudden vision of having his body on hers, pressing into her. She gasped to hide the groan that wanted to push its way free from her throat.
She watched as his eyes seemed to grow darker, his luscious mouth parting in the most seductive way. Bryn shook her head and cleared her throat.
‘Korvain?’
After a long, hot, lingering look, he nodded.
Her eyes slid shut as another flash of them touching intimately assaulted her. Letting out a breath, she pinned him with a look that usually sent most men into hiding. ‘Mind getting your ass off my desk?’ she snapped, stalking past him to sit in her huge leather chair.

Check out the book trailer!


With the release date set for July 1st, be sure to enter the giveaway below to get yourself in the running for some awesome Dark Deceit swag!

Lauren Dawes is an urban fantasy/paranormal romance writer and the author of the Half Blood Trilogy. You won’t find any friendly vampires in between the pages of her books; just blood, teeth and violence. When she’s not writing, she’s reading or teaching. She currently lives in Victoria, Australia with her husband and cat.