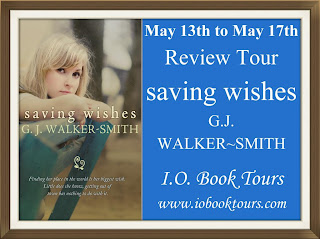 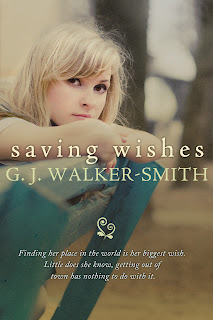 For Charli Blake, being seventeen is a tough gig.
She's been branded a troublemaker, her reputation is in tatters and she's stuck in Pipers Cove, a speck of a town on the coast of Tasmania.
Thankfully, it's temporary. Her lifelong dream of travelling the world is just months away from becoming reality. All she has to do is ride out the last few months of high school, which is easier said than done thanks to a trio of mean girls known as The Beautifuls.
When Adam Décarie arrives in town, all the way from New York, life takes an unexpected turn. His arrival sets off a chain of events that alters her life forever, convincing her of one thing. Fate brought him to her.
Saving Wishes is the story of a girl who doesn't quite fit the life she's living, and the boy who helps her realize why.
ADD ON GOODREADS
BUY LINK
Amazon
About the author

G.J Walker-Smith’s day job used to be in the stressful world of property management, until she realized she’d rather write books and raise her babies.
She lives in Western Australia, has an egotistical French bulldog, a love for really good coffee and a million stories in her head that she hopes to put into print.
LINKS
Facebook  | Goodreads
My Review
Purely Spellbinding!
I would like to thank the author G.J. Walker-Smith and also I.O. Book Tours for giving me the opportunity to review Saving Wishes for this tour.
I have to admit, it's the cover that first caught my eye and once I read the blurb, well it sealed the deal. ;-)
I absolutely fell in love with this story, it's about a young girl trapped in a small town in Piper's Cove, Tasmania, Australia. With dreams of travelling the world with her best friend, Charlotte or as she prefers to be called Charli, is not your average teenage girl. Charli has a free spirit, she's adventures and likes to live spontaneously. Living in such a small town nothing is kept secret and everyone knows everybody's business, and Charli had become known for her craziness as the troublemaker. But see causing trouble was the only way to have a little fun. ;-)
Charli, she's such a unique and intriguing character, I loved how she always had something to say and if someone was being rude she always stood up for herself and others OR she just took action instead, lol. Charli believes in fate and she believed that a certain handsome French/American Adam was in town just to find her, and maybe he was.
Adam, is such a gorgeous character not only is he completely swoon worthy but he is also smart, sweet, generous, bold and did I mention he speaks French?! *sigh* I don't speak or undertsand French but I swear when he spoke I had a sweet, sexy voice in my head, lol. Adam had come to town to visit his cousin and when he met Charli things started to happen.
G.J. Walker-Smith has written a truly beautiful story. From the very first page I was sucked in, Charli tells her story with such conviction you can't help but feel like you're there watching it unfold. All the characters bring along something special, even the ones you want to smack in the face (which there are quite a few), lol.
The plot is full of twists and turns, I had my mouth hanging open a few times, lol. G.J. Walker-Smith knows how to keep her readers on their toes. And she also knows how to keep them coming back for more, I know that I'm dying to get my hands on book two, Second Hearts. Which from Goodreads, is already out. So I'm off to purchase my copy and get back into this astoundingly addictive story.
My Rating

Or if you want paperback﻿