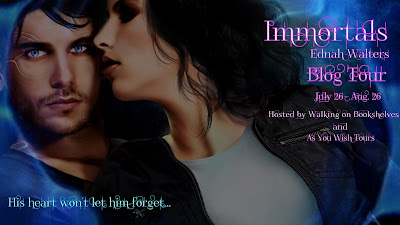 Nothing can stop Raine Cooper when she wants something...
Raine finally knows that her gorgeous neighbor, Torin St. James, is a legend straight out of Norse mythology but that doesn’t stop her from falling hard for him. Torin is crazy about Raine too, breaking the one rule he lives by: Never fall for a mortal. The problem is he no longer remembers her or that she saved him by making a deal with Norns—Norse destiny deities—the same Norns who have now erased his memories of their past together to punish her. So Raine comes up with a plan... She will make Torin forget his one rule a second time and fall in love with her all over again. But before Raine can put her plan into action, the Norns return. This time, they demand she protects Eirik Seville, her best friend since childhood, from an evil so dark even the Norns are scared. But you know what they say about well-laid plans… Caught between protecting Eirik and convincing the stubborn, cocky Torin St. James that the two of them are meant to be together, Raine's life slowly unravels. Friendships are tested. Enemies become allies. Desperate, Raine makes choices that could not only tear her and Torin further apart, but lead to the destruction of everything and everyone she loves. 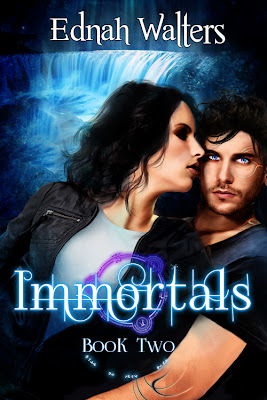 BOOK LINKS
Amazon Paperback
Goodreads
Excerpt
I stared at Torin. Maybe the stress finally got to me, but the question hurt. You are my boyfriend, I wanted to yell even though I knew it wasn't his fault he couldn't remember. Needing distance between us, I shook my head, turned without answering him, and pulled open the door with more force than necessary. He gripped the door before I could slam it shut.
"Raine," he whispered softly.
"Don't, I'm trying really hard to be understanding, but it's hard." Tears welled in my eyes. No, I'm not going to cry. No, no, no! I was better than this. Crying over a guy was something I'd never done until I met Torin. I looked away from him and blinked hard to stop the tears from falling.
"Look at me."
"No, go away." I pushed the key into the ignition.
"Please." He took my chin, lifted it, and turned my face toward him. A spasm crossed his face as though seeing the misery in my eyes---there for the entire world to see---was too much for him.
He caressed my cheek. "I'm sorry I always make you cry or angry."
"I'm not crying," I ground out and blink harder. "And I'm not angry."
He pressed his thumb on my lips to stop me from talking, and the effect on me was instant. My lips tingled, his touch searing. A storm of longing burst deep soul, and I shuddered. I was completely helpless against the effect he had on me.
He pulled his hand back as though scalded and scowled, blue eyes dimming. For a moment, we stared at each other. He looked shocked by his response. I wasn't.
"I am," he said,frowning.
"You're what?"
"Angry, but I don't know why. It's obvious that Lavania and Andris didn't tell you about me, yet you know details about my personal life only the two of them know.
"That's because---"
"Please, let me finish. I was here when Andris and a bunch of Valkyries came to collect the souls of your swim team members."
"You were one of them," I cut in. "You lived here then just before the meet."
"You must be mistaken." He sighed. "I don't remember living here, but it's familiar, so I must have visited them. I was in Washington to reap some college kids while the others were here. We hadn't yet decided to make Kayville our base."
I shook my head. "The Norns gave you false memories, Torin. We were neighbours."
"Norns don't mess with the memories of Valkyries. There's no reason to."
"But---"
"Look, I don't want to argue with you. You tell me things you insist I did and said, yet I have no memories of ever saying or doing them. I thought Ingrid or Maliina might have told you, but Andris swore he never told them anything about my past. Maybe Maliina overheard stuff and shared them with you before she went rogue. I don't know. All I know is I never met you until two weeks ago when you kissed me. I've spent the last two weeks thinking about you, and I think I now know what might have happened."

5 SASSY BOOKS!
My Review:
With each book Ednah brings out she just keeps amazing me. Immortals is the second instalment in the Runes series. I fell in love with Runes right from the start and Immortals made me
fall even harder.This book was so enthralling I'm at a loss for words. Each word is like a drop of magic, you become absolutely spellbinded.
How would you feel if the man you loved turned up with no memory of you or the time you spent together? This is what Raine has to deal with. Torin, the love of her life cannot remember her at all and it's eating Raine alive. But she's not gonna give up, she's gonna do everything she can to get his memory back. Raine's a fighter and I love that about her.
Torin, my goodness he's so swoon-a-licious. No matter what he trys to do he's drawn to Raine and he can't ignore the feelings that he starts to feel. Torin will make your heart flutter, he's a sexy biker who always has the right things to say to get any girl weak in the knees.
With an explosive storyline, characters you'll just fall in love with, each turn of the page brings new twists and turns, always leaves you guessing and wanting more. Ednah's created a world you can totally get lost in but in a good way. I can't wait to read more.
This series is a MUST READ!! So, if you haven't picked up book 1 Runes yet, than you're missing out. You won't regret it!!
﻿
AUTHOR BIO


EDNAH WALTERS grew up reading Nancy Drew and the Hardy Boys and dreaming of one day writing her own stories. She is a stay-at-home mother of five humans and two American short-hair cats (one of which has ADHD) and a husband. When she is not writing, she’s at the gym doing Zumba or doing things with her family, reading, traveling or online chatting with fans.

Ednah is the author of The Guardian Legacy series, a YA fantasy series about children of the fallen angels, who fight demons and protect mankind. AWAKENED, the prequel was released by Pill Hill Press in September 2010 with rave reviews. BETRAYED, book one in the series was released by her new publisher Spencer Hill Press in June 2012 and HUNTED, the third installment, will be released April 2013. She’s working on the next book in the series, FORGOTTEN. Visit her at www.ednahwalters.com


Ednah also writes YA paranormal romance. RUNES is the first book in her new series. IMMORTALS is book 2. She is presently working on book 3, GRIMNIRS (Release date TBA). Read more about this series and the world she's created here www.runestheseries.com


Under the pseudonym E. B. Walters, Ednah writes contemporary romance. SLOW BURN, the first contemporary romance with suspense, was released in April 2011. It is the first book in the Fitzgerald family series. Since then she has published four more books in this series. She's presently working on book six. You can visit her online at or www.ebwalters.com.