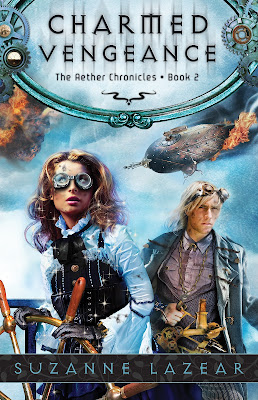 In the Faerie realm, Noli Braddock's relationship with her best friend V has grown into something more. But V's mother, Faerie Queen Tiana, has ruled that they are forbidden to see each other. Returning to the mortal realm, Noli joins the crew of her brother's air-pirate ship, the Vixen's Revenge. There she discovers that her brother has hired the scallywag Faerie huntsman, Kevighn Silver. While serving as shipmates, Kevighn and Noli learn that the Earth Court King plans to find a forbidden artifact--one that will bring destruction to everyone Noli loves.
ADD ON GOODREADS 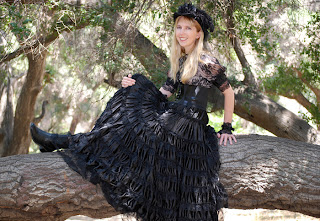 Suzanne Lazear is the author of the Young Adult Steampunk dark fairytale series THE AETHER CHRONICLES. Book 1, INNOCENT DARKNESS is out now. Book 2, CHARMED VENGEANCE, releases 8-8-13. She always plays with swords, is never described as normal, and has been known to run with bustles. Suzanne lives in Los Angeles with her daughter and the hubby,and a hermit crab. Learn more about THE AETHER CHRONICLES at http://www.aetherchronicles.com and her at http://www.suzannelazear.com
Links:
WEBSITE