Her Wicked Angel
(Her Angel Romance Series Book 6)by Felicity Heaton
The King of Demons and the Devil’s right hand man, Asmodeus is a dark angel born of evil and created for destruction. When his master orders him to venture into the mortal world and retrieve a female for him, he seizes the chance to leave Hell for the first time, uncaring of what the Devil has planned for her… until he sets eyes on the most beautiful woman he has ever seen—a female who awakens new feelings within his black heart, unleashing passion so intense that it controls him and desire he cannot resist.

He will not let his wretched master have her. She will belong to him.
Liora is a witch with a bad reputation and an obsession with fighting demons. A mission gone wrong sees her sent to Paris to cool off, but when a dark and deadly warrior with a gaze of golden fire lands in her life, she ends up burning hotter than Hell for the wicked angel. Nothing will stand between her and the immense, forbidding male. Not her cousin. Not Asmodeus’s sworn enemy and twin, Apollyon. And certainly not the Devil.
Caught up in a tempest of danger and soul-searing passion, can they survive against the odds and seize their forever after?
Her Wicked Angel is due for release on September 21st 2013 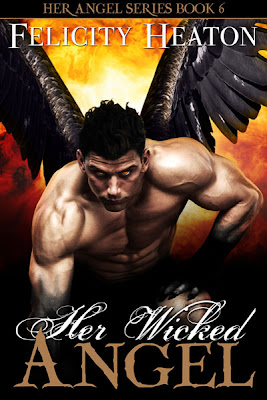 In 2011, five of her six paranormal romance books received Top Pick awards from Night Owl Reviews, Forbidden Blood was nominated as Best PNR Vampire Romance 2011 at The Romance Reviews, and many of her releases received five star reviews from numerous websites. In 2013, Heart of Darkness was a finalist in the paranormal romance category at the Epic Ebook Awards.

If you want to know more about Felicity, or want to get in touch, you can find her at the following places:
Website | Blog | Facebook | Twitter | Goodreads﻿
Posted by Stacey at 12:00 AM