**SPOTLIGHT, EXCERPT & GIVEAWAY** When a Rake Falls by Sally Orr

I’m Sally Orr, the author of the new historical Regency-era romance, WHEN A RAKE FALLS. This is book 2 in The Rake’s Handbook series. Thank you so much to Sassy Book Lovers for hosting me today. I’m excited to introduce you to WHEN A RAKE FALLS.

In order to for you to get to know my hero and heroine, Miss Eve Mountfloy and Lord Boyce Parker, a little better, I’ve conducted a mini interview to give you a little taste of WHEN A RAKE FALLS.

What is your dream vacation?

Boyce:  A trip to the stars in a balloon.
Eve: A trip to the Royal Institute of Great Britain to hear a chemistry lecture given by Mr. Michael Faraday.

What is your greatest strength?

Boyce:  I love everybody, as long as they don’t offend me with sartorial crimes like a purple greatcoat.
Eve:  My love for my family.

What is your biggest fear?

Boyce:  That my father only loves his sons that have had great achievements and not me, the singing runt of the bunch.
Eve:  That other people will lose the life of loved ones, like I lost my brother Tom, in a violent storm. 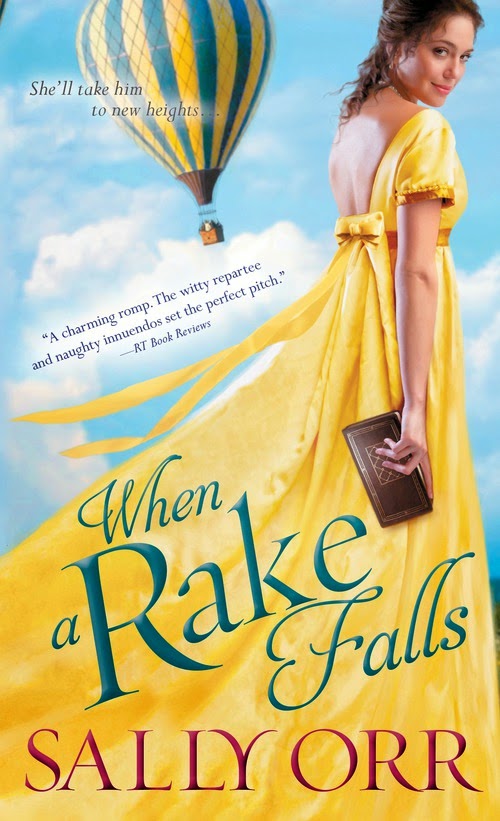 He’s racing to win back his reputation

Having hired a balloon to get him to Paris in a daring race, Lord Boyce Parker is simultaneously exhilarated and unnerved by the wonders and dangers of flight, and most of all by the beautiful, stubborn, intelligent lady operating the balloon.
She’s curious about the science of love

Eve Mountfloy is in the process of conducting weather experiments when she finds herself spirited away to France by a notorious rake. She’s only slightly dismayed—the rake seems to respect her work—but she is frequently distracted by his windblown physical magnificence and buoyant spirits.

What happens when they descend from the clouds?

As risky as aeronautics may be, once their feet touch the ground, Eve and Boyce learn the real danger of a very different type of falling…

Praise for The Rake’s Handbook

“Orr debuts with a charming romp. The witty repartee and naughty innuendos set the perfect pitch for the entertaining romance. Though there are serious themes and carefully researched historical details, it’s the banter and sensuality that are sure to enchant readers.” --RT Book Reviews, 4 stars

Sally Orr worked for thirty years in medical research, specializing in the discovery of gene function. After joining an English history message board, she posted many, many examples of absolute tomfoolery. As a result, a cyber-friend challenged her to write a novel. Since she is a hopeless Anglophile, it's not surprising that her first book is a Regency romance. Sally lives with her husband in San Diego, surrounded by too many nerdy books and not enough old English cars.

Excerpt from WHEN A RAKE FALLS