Today we have on the blog Author Lisa Beth Darling. She has a special Guest Post and excerpt to share with us today. Enjoy!! ^_^


What Is Love?
I'm at a point in my life where I have a long road that I can look back on with a good deal of clarity. On that road I can ask myself questions that almost always start with 'What If'.  One day I asked myself: What if love is more than just romance?
Without a doubt, Romance is the largest and biggest selling category in the book market—there's a stigma attached to that one that I don't understand but let's skip over that part for this post.
Tossed about in the rocky sea of today's book market, if a writer doesn't write some form of Romance, be it Erotic Romance, or Dark Romance, or Sweet Romance, or Paranormal Romance or YA Romance (and/or any sub-genres thereof) it is difficult for them to get noticed. It's hard to stand out from the crowd, well, to be honest, that's a difficult feat to accomplish when you're drowning in that stormy sea as well.  So, if you're going to write something that doesn't quite fit in with all of that please be prepared to search long and hard for your niche.
But do it anyway.
On the whole, I write what I like to call Relationship Based Stories wherein the relationship between the two main characters is the focal point. It's not necessarily 'romance' in the traditional sense of flowers, candles, and diamonds.  I wrote a long, hot, sexy, action-filled series entitled OF WAR it was full of lust, betrayal, rage, and some redemption.  When I was finished with it I found myself on that road, that little path through the woods in my head asking the above question; What if love is more than just 'romance'?  What if we did something totally different, and yet very similar, just with no sex, in fact with two main characters who really couldn't even conceive of indulging in such a thing because they are brother and sister?  Wandering down my merry little road I found I really liked this idea. I answered the first question with a resounding: Of course love is more than 'romance'.
There's the love of a parent for a child and the child for the parent.
There's the love of your best friend in the whole wide world, the one you wouldn't trade for anything.
There's the love between siblings, cousins, aunts, and uncles.
All of these people play very important roles in our lives as they teach us so many lessons in love, acceptance, patience, joy, misery, and laughter.
So, I sat down at the keyboard with my Muse and we wrote "Genesis" the story of Doctor Richard Mason—world renowned physician and borderline alcoholic—who has just found he's adopted. He loved his mother but hated his father. He has three failed marriages behind him and fourth (the first) which ended in the death of his beloved Barbara. Enter Hannah Rice, physically disabled from a tragic car accident 30 years before, she's spent most of her life in group homes as her health and mind deteriorated.  She has no one to turn to but her brother who's not the most patient guy on earth.
Eventually the story was finished and the Muse and I went on to write the next installment in the Sister Christian Series, "Sins of the Father".  It has turned out to be one of the most interesting and in my humble opinion one of the best things I've ever written or even done in my life.  (Let's hope it continues on this way through the end of the series.) Yet because it doesn't have any hot sex, vampires, shifters, werewolves, highlanders, cowboys, bikers, or billionaires the chance of the series finding a nice little audience is slim.  Still, I hope the few hands it finds its way to enjoy the story and see Mason and Hannah for the wonderful characters they are and the deep love they come to share. I hope readers will thrill at their victories and cry at their defeats, they will cheer the characters on as they watch brother and sister muddle through the second half of their lives.
In the end, I hope they come to understand as I have, that love is far more than just romance. 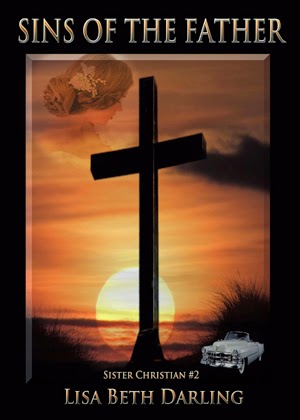 As Hannah recovers from emergency brain and heart surgery, memories of the past take over her dreams with such clarity they cannot be denied. As the last of the painful family secrets, including what really happened the night of Hannah's accident and the circumstances surrounding the death of her only son, Little Ricky, come to light it's up to her brother, Doctor Richard Mason, and his unconventional methods to help her confront the ugliness.  For it is only when we deal with our demons that we can leave them behind and work toward a bright future.
Please note this novel/series is NOT a "Christian" or "religious" story. Adult themes apply and reader discretion is advised.

EXCERPT
Something that sounded like a shotgun blast echoed through the church. Father Murphy ran out of the vestibule. "What is it?"
"Someone's at the door." Sister Cynthia said.
"Who knocks on the door of a church?" Father Murphy huffed.  The sound came again. It was sharp and demanded attention. Those were not knuckles wrapping at the door.
Outside in the rain, Spaulding turned to Mason and echoed Father Murphy's sentiment. "What's wrong with you? No one knocks on the door of a church."
"How ya supposed to get 'em to let ya in?"
"Open the door?" Spaulding put his hand on the handle as he went to push it; it was opened from the other side. "Oh, hello, Father." He stuttered.
Father Murphy looked at the two men standing in the pouring rain. "Are you here for her?  Please tell me that the Lord has guided your steps and brought you here for her."
"Actually it was a trail of broken glass, not God." Mason said gruffly. "Where is she? Where's Hannah?"
Father Murphy held out his arm and stood aside. "Come this way, My Son."
Putting one foot over the threshold of the church Mason looked at the priest, "Let's get one thing straight right now, Padre, I'm not your son."

Also available on Kobo, Diesel, Oyster, Scribd, and others