**SPOTLIGHT & GIVEAWAY** First Time with a Highlander by Gwyn Cready 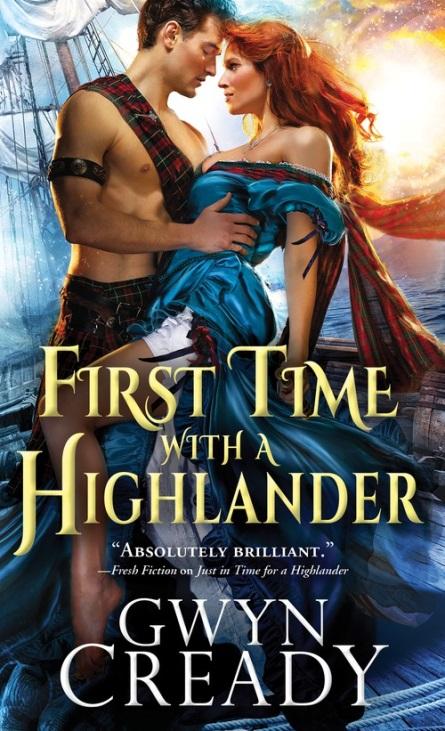 From the “master of time travel romance”, award-winning author Gwyn Cready continues her steamy Sirens of the Scottish Borderlands series.

She needs a man—but only for a night

What do you get when you imbibe centuries-old whiskey—besides a hangover the size of the Highlands? If you’re twenty-first century ad exec Gerard Innes, you get swept back to 18th-century Edinburgh and into the bed of a gorgeous, fiery redhead. Gerard has only a foggy idea what he and the lady have been up to…but what he does remember draws him into the most dangerous and exhilarating campaign of his life.

Be careful what you wish for…

Serafina Seonag Fallon’s scoundrel of a fiancé has left her with nothing, and she’s determined to turn the tables. If she can come up with a ringer, she can claim the cargo he stole from her. But the dashing man she summons from the future demands more than a night, and Serafina finds it easier to command the seas under her feet than the crashing waves he unleashes in her heart.

Gwyn Cready is a writer of contemporary, Scottish, and time travel romance. She’s been called “the master of time travel romance” and is the winner of the RITA Award, the most prestigious award given in romance writing. She has been profiled in Real Simple and USA Today, among others. Before becoming a novelist, she spent 25 years in brand management. She has two grown children and lives with her husband on a hill overlooking the magical kingdom of Pittsburgh.

This October the second in Gwyn Cready’s Sirens of the Scottish series, First Time with a Highlander, comes out! To celebrate, Gwyn’s here to tell us a little bit more about the inspiration behind her time-travel romances AND play a quick game of “Would You Rather.”

“People often ask me why I like to write time travel romance, and it’s a two-part answer, because there are really two questions in there—why do I like to write romance, and why do I like to write time travel.
I began to write with the intention of getting published in June, 1997 to honor my younger sister, who was a poet and photographer and who had died suddenly the month before.  The sort of book I wanted to write was a book like the one a friend had given me a few months earlier—Outlander. At that time, I’d never read a romance before, and I COULDN’T PUT IT DOWN. Jamie is the best sort of hero—devoted, funny, brave, smart, and supportive of the heroine. I was so hopped up on the first three Outlander novels, it was pretty much all I could talk about in the spring of 1997—and it was one of the things I talked to my sister about since her college boyfriend had been named Jamie and like the heroine in Outlander, my sister’s name was Claire. It was the last conversations I ever had with her.
So there I am, in 1997, wanting to honor my sister with a book, and certain the book I want to write is a romance like Outlander. Time travel fit in nicely for me. Outlander is a time travel novel, of course, but I’d been a time travel fan before that. The Back to the Future movies are my holy grail of time travel. I loved Somewhere in Time, of course, as well as the Terminator movies, Time After Time, and Groundhog Day. Time travel lets you quickly throw your character into adversity and see if he/she sinks or swims. The question you want readers asking in romance novels is “How, with all these challenges, will the hero and heroine still end up together?” Time travel adds another layer to that tension, specifically, “How will they end up together when each is destined to be in his/her own time?” In my mind, one of the most heroic things a character can do is give up his own time in order to be with the person he/she loves, and that’s always a tender and gripping moment to write in my books.
Which brings us to First Time with a Highlander. Serafina and Gerard were such fun characters to chase through a novel. As with Just in Time for a Highlander, the first book in the Sirens of the Scottish Borderlands series, I wanted to shake things up a bit by having the hero be the person who travels to the past. Gerard is an ad man—and since I spent twenty years working in brand management at a big pharma company, I know what ad men are like. The women in this series hold positions of unusual power for women in the eighteenth century, and Serafina is no exception. She inherited a shipping concern from her father, but her blackguard of an ex-fiancé has run the business into the ground. He’s ruined her socially and financially, but Serafina is not one to take things lying down. She uses herbs she’s, ahem, “borrowed” from a famed spell-caster to summon a man to help her claim the cargo from the ship’s final voyage before her fiancé can get his hands on it. She only needs a man for one night and…well, you can imagine what that leads to in the hands of an inexperienced spell user. But Serafina is willing to pay the price—in fact, she’s quite willing once the smart, dashing Gerard appears.

Would You Rather Question: Would you rather never have coffee again or live without TV forever?

Ouchie. Tough one. I love coffee. It’s my drug of choice. But since I can substitute Vivarin for coffee… I don’t watch a lot of TV, but, damn, it’s gotten so good lately—and it’s really fun to chat about the latest show with friends and family. We love Lost, Breaking Bad, Mad Men, Broadchurch, Downton Abbey, Outlander, Veep, Archer, Welcome to Sweden, Hindsight, Sherlock, and Homeland. Our current fave is Mr. Robot. Thank God for Tivo, Hulu, Amazon, and Netflix!