Today is the release day blitz for HIS LULLABY BABY by Airicka Phoenix. This is an adult novel that is the 5th, and final, book in the Baby Saga. Check out the buy links and teasers below.

Add HIS LULLABY BABY to Goodreads

Nothing ever happens by accident.

Ex-combat search and rescue officer Toby McClain had seen all aspects of humanity in his ten years of service until friendly fire took him out of action. But bitterness was something Toby could never do. He was alive. He had his family and, after being ambushed by a door, he had his eyes on the sexy new innkeeper.

Adelaide Nixon had felt the burn of love once already. It was a mistake that cost her six years of her life. It was a punishment she never wanted to feel again, especially when there were two little people who depended on her to keep them safe. The last thing she wanted or needed was the attention of a guy whose family kept the gossip mills turning.

But no secret ever stays hidden in a place like Willow Creek. Even as Toby breaks through Addy’s walls, a new threat comes to town, leaving her no choice but to put more than her heart in Toby’s hands and trust him not to destroy her. 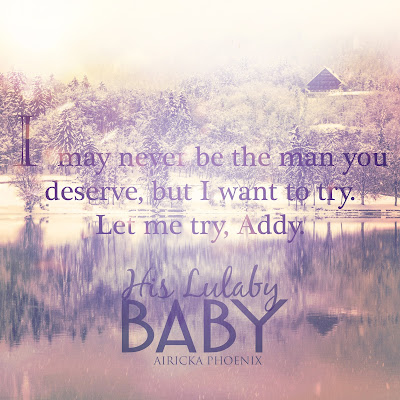 
Self-proclaimed romance addict, Airicka Phoenix lives in a world where unicorns, fairies and mermaids run amok through her home on a daily basis. When she's not chasing after pixies and rounding up imps, also known as her four children, she can be found conjuring imaginary friends to play with. Airicka is the prolific author of over eighteen novels for those who crave strong, female leads, sexy alpha heroes and out of control desires. She's a multi genre author who writes young adult, new adult and adult contemporary and paranormal romance. For more about Airicka and the realm she rules with an iron fist--and tons of chocolate--visit her at: