Sky changed her life for a man once, and she has no intention of doing it again - even if he is a six-foot, tattooed rock god who makes a mean bacon sandwich.

Sky Davis is fed up of boyfriend Grant taking her for granted, and when she comes home to find him wearing a girl, Sky suspects the relationship is over. She takes an unscheduled vacation and leaves the life (and guy) she hates behind.


Rock star Dylan Morgan is struggling with fame and infamy, sick of his life being controlled by other people. Dylan cuts his hair and walks away from his role as lead singer of Blue Phoenix, leaving behind chaos and speculation.


Outside the English seaside town of Broadbeach, their cars and worlds collide.


Sky decides Dylan is an arrogant guy with too many tattoos, and Dylan is amused by the smart-mouthed girl with no idea who he is. Dylan and Sky soon discover they've travelled to Broadbeach for the same reason - to escape from reality and head back to a place with happy childhood memories. Losing themselves in a world where they know nothing about each other, Sky and Dylan begin a holiday romance that soon heats up their rainy English summer. 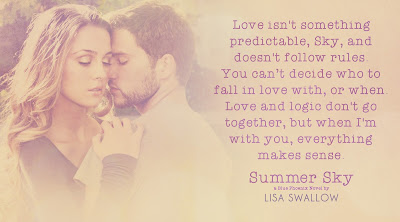 Sky’s world turned upside down when she met rock star Dylan Morgan, and exploded when she discovered his hidden past.

Four months after Sky learns Dylan’s devastating secret, she’s trying to piece her life back together. Without an explanation from Dylan, Sky has no choice but to try and forget him.

Dragged back into the life he ran from, Dylan continues to spiral downwards as he copes with his fame the only way he knows how. Shattered by the revelation Sky knows his darker past, he forces himself to return to England and explain.

Sky and Dylan reconnect, attempting to build on the shaky foundations of their summer. But the outside world continues to conspire against them.

Taking place in the epicentre of the Blue Phoenix world, Sky and Dylan’s story continues amongst the chaos surrounding the band and its members. 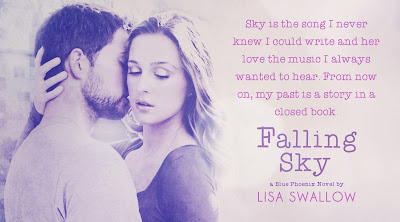 
1. A reader told me she though this song was perfect for Dylan and Sky and I’d never even considered it until I listened. She was right!
For Dylan, being with Sky in the place from his past reminds him of a childhood where life was easier. And of course the song mentions the bright Sky!

“When I look into Sky’s eyes, I see myself reflected back. Something in them holds a lost part of me I can only find by being with her.” Dylan in Summer Star

2. Dylan is suffocated by his fame and he runs from the pressure of his life. Not only does being away and anonymous allow him to breathe, but being with Sky breathes a new life into him. But reality catches up and he’s forced back into his old world.

“I wanted to live in the illusion for longer. You let me breathe, Sky. You connected me to something long gone, and now I’m lost again.” Dylan in Summer Sky

Give Me Room to Breathe - You Me At Six

3. Sky doesn’t know who Dylan is and each time she sees him in a band t-shirt, she asks him if it’s his band. One of Dylan’s favourite bands is White Stripes and he wears a tee in Summer Sky. The song is also perfect for Dylan’s state of mind and situation when Sky discovers who he is.

“Do you know how f*cking hard it is to be owned by everyone around you? What that does to a person?” Dylan  - Summer Sky

4. When Sky discovers who Dylan is, it takes her time to accept she can be part of his world but she worries whether their relationship can survive public scrutiny and how this will affect her. This continues in Falling Sky as they attempt to navigate a lot of craziness thrown at the by his and the band’s  lifestyle.

"The one thing I can't let go of is the sneaking fear our colliding worlds will explode, taking me with them." ~ Sky in Summer Sky

5. This beautiful song suits their relationship too. There’s a scene towards the end of Falling Sky when Dylan is alone in a hotel room and they need each other and the song made me think of this.

With Dylan, love becomes a different concept. Not hearts and flowers, or lust and need, but the unexplained, frightening place two people go and are lost together ~ Sky in Falling Sky

Cecilia and the Satellite - Andrew McMahon In The Wilderness
https://www.youtube.com/watch?v=G_zY_jSVXSU

Full Playlist for the Books

Author Bio
Lisa is an Amazon bestselling author of contemporary and paranormal romance. She is originally from the UK and moved to Australia in 2001. She now lives in Perth, Western Australia with her husband, three children, and Weimaraner, Tilly, who often makes appearances on Lisa’s social media.
Lisa’s first publication was a moving poem about the rain, followed by a suspenseful story about shoes. Following these successes at nine years old there was a long gap in her writing career, until she published her first book in 2013.
In the past, Lisa worked as an English teacher in France, as an advertising copywriter in England, and ran her own business in Australia. Now she spends her days with imaginary rock stars.


She lived in Europe as a child and also travelled when she left university. This has given Lisa stories which would sound far-fetched if she wrote them down, and maybe one day she will. These days, Lisa is happy in her writing cave, under Tilly’s supervision.

AUTHOR LINKS:
Posted by Renee Booth at 6:00 AM