**COVER REVEAL & GIVEAWAY** You Were Here by Cori McCarthy 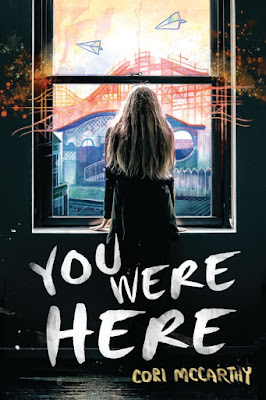 Narrated in multiple formats including word art poetry, graphic novel panels, and prose, this visually stunning story follows Jaycee Strangelove and an unlikely group of friends on a post-graduation adventure as Jaycee chases the memory of her late brother by completing the death-defying stunts that got him killed.
Jaycee’s companions: her ex-best friend, a slacker with Peter Pan syndrome, a heartbroken poet, and a selective mute all have their own reasons for attempting her brother’s dares. But as they delve deeper into the urban ruins that captivated Jaycee’s brother, from the petrifying remains of an insane asylum to the skeletal remnants of the world’s largest amusement park they learn a singular and unforgettable lesson on the truth about friendship, heartbreak, and inevitable change.

Pre-Order You Were Here