**BOOK BLITZ** Lost in Us by Layla Hagen 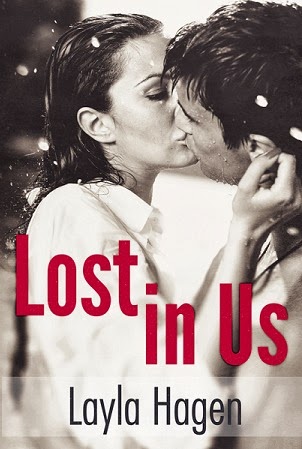 Serena has learned to live with her past, locking her secrets and nightmares deep inside her. But when her boyfriend of six years abruptly leaves her, she’s catapulted back into pain, nursing a broken heart. When indulging in mountains of chocolate doesn’t work, Serena decides the best way to deal with her shattered heart is to indulge in something else. A rebound . . .

The night she swaps her usual Sprite for tequila, she meets James. The encounter is breathtaking.
Electrifying.
And best not repeated.

James is everything her damaged soul could want. His kisses are intoxicating, his touch out of this world. He makes her forget. He grants her peace from her pain. But as they grow closer, Serena discovers she isn’t the only one with a past. James carries the scars of a past much darker than hers. One that has left him damaged, hurt, and wary of love. A past that gives him the power to shatter her.

Now James and Serena must find a way to mend one another. Or risk losing each other forever. 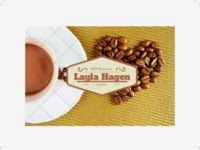 My name is Layla Hagen and I am a New Adult Contemporary Romance author.

I fell in love with books when I was nine years old, and my love affair with stories continues even now, many years later.

I write romantic stories and can’t wait to share them with the world.

And I drink coffee. Lots of it, in case the photo didn’t make it obvious enough 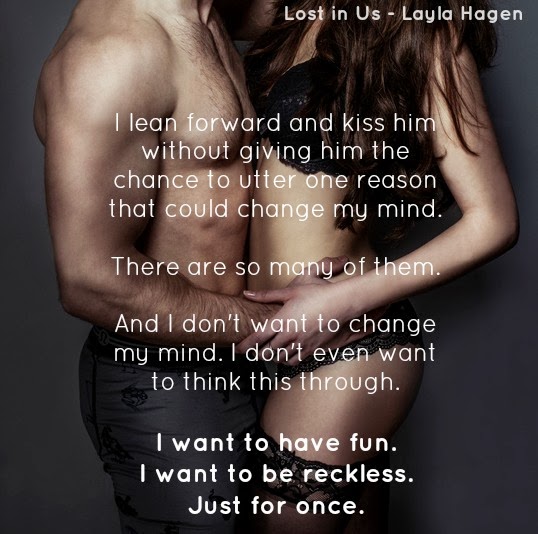 "Red suits you," a voice calls behind me. I'm suddenly very grateful for being squeezed in, because my knees seem to have turned to rubber. But my relief only lasts for a few seconds, because the music starts and everyone around me disperses, moving to the dance floor.
I don't fall. I can't move, either.
When he finally comes into view, my breath is cut short. There is something about seeing his beautiful blue eyes behind a mask that makes every inch of my skin burn.
So it wasn't the tequila last night.
"Dance?" He extends his hand.
"I can't dance." Out of the corner of my eye I see Sophie watching us, crestfallen.
"That makes two of us," he says, though unlike me, he doesn't sound panicked in the slightest. I really can't dance. Especially not waltz. But he doesn't lower his hand, and instead of protesting further, I raise my hand and place it in his. As if in slow motion I see him putting his
other arm around my waist, and pulling me so close to him that I feel his every breath against my skin. This doesn't help the burning sensation. At all.
"You came," he says and his lips curve into last night’s same conceited smile.
"I make a habit of honoring my invitations," I say, surprised by how aggressive I sound. I bite my lip and look away, fixing my gaze on the highest point of the glass arch.
"Did you and your friend arrive home safely last night?"
Small talk. Fantastic.
"If safely includes Jess throwing up twice on the way home, then yes."
"Quite a party girl, your friend," he says appreciatively.
"What makes you think I'm not one?" I regret the question instantly. Thinking that a former math whiz kid isn't the most hardcore party girl at Stanford is not an absurd conclusion to draw. But his answer takes me by complete surprise.
"Having a steady boyfriend usually means you spend your free evenings and weekends… otherwise."
"You asked Dani to spy on me?"
"Of course not," he says with fake affronting. "I just know how to get the info I need from her."
"What happened to old-fashioned questioning?"
"It's old-fashioned," he answers with a smirk. "I like to consider myself modern."
"Make that lazy and sneaky." I finally unhitch my gaze from the ceiling and look him in the eyes again. They are so much darker than a few minutes ago.
He tightens his grip on my waist. "Fine. Tell me three things about you."
I try to put on my most serious look. "I grew up in London and San Francisco, used to play volleyball in a minor league, and want to work in investment banking." Did he really think I'll make it easy for him?
"Let me rephrase," he smirks. "Tell me three things about you I won't find in your CV. Three dreams."
The next sentence rolls out of my mouth despite my firm resolution to torment him by not really telling him anything about me. Especially not the weird things.
"I want to taste every single recipe in Willy Wonka's chocolate factory, get myself kidnapped by elves and locked up in Rivendell, and attend the midnight release of the next book about the wizarding world that I know Rowling will write. If that last thing fails, I want to learn how to fly on a broom, at the very least."
He bursts into a cascade of laughter. But it's not in the slightest mocking or mean. It's warm and heartfelt.
And loud.
"Your turn," I say, in an attempt to stop him, because we are attracting less-than-friendly stares from the couples around us. "Stop laughing like a maniac and tell me three things about yourself. Three fears."
He laughs for a few more seconds before assuming a solemn face.
"I hate snakes and always keep a light on when I sleep. And I suffer from chronic commitment phobia."
His words hit me like a whiplash. Amazing how lighthearted and playful he throws them at me.
"So I've heard," I say, trying—and failing—to keep my voice steady.
"I wanted to make sure you know it from me," he says in a soft voice. Yet for all the softness, it still feels like whiplash.
"That's very considerate of you."
Why do his words have this impact on me? Why do they have any impact at all? I guessed a while ago how things are. I wish we weren't dancing so I could run away. Put as much distance as possible between him and me. My wish is not far from being granted. Though I haven't listened to many waltzes in my life, I'm sure the orchestra is playing the ending tones right now. I try to distance myself from his intoxicating presence, but his grip on me is firmer than ever.
"I saw how you were looking at me in that bar," he whispers with urgency.
Crap, so Jess wasn't exaggerating. I do my best to put on the poker face she mimicked on our way home, then I remember I have a mask on anyway.
"Why did you invite me here?"
"Why did you come?" he asks, and there is a slight uneasiness in his voice.
"Because you invited me," I answer as sardonically as possible.
"I was curious," he says quietly.