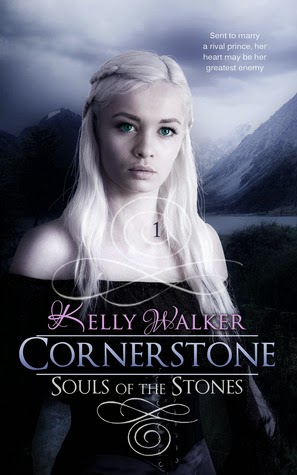 Epic Fantasy combines with Young Adult romance in this stunning new adventure set in a richly developed medieval world. Second Stone and Broken Stone are now available! Also be sure to look for Jaded Stone, the thrilling prequel to the
Souls of the Stones series.

When Emariya Warren learns enemy forces have captured her father, she’ll do anything to save him. Anything. Even marry a mysterious prince she knows nothing about in order to rally the strength to arrange a rescue. During her journey to Torian’s foreign castle, Emariya comes face to face with her mother’s killers–and a deadly secret.

Not only does Emariya possess a powerful but unexpected magical gift passed down through each of her families, the prince she’s promised to marry possesses a third, and an ominous prophecy has warned the three gifts must never be combined.

If she breaks her promise to marry Torian, she won’t be able to save her father and if she keeps it, she may bring a curse upon everything she holds dear. Determining which choice is best won’t be easy, but when she meets the gorgeous prince who may desire more than just her heart, she realizes she will have to fight just to have a choice at all.

Her heart wants him desperately. Her head begs her to run. If she doesn’t want to share her mother’s fate, she’ll have to find a way to untangle the truth from the lies in time to save herself.

Kelly Walker is a YA and NA author of several romantic titles, including the Souls of the Stones series. She has an unhealthy appreciation for chocolate, and a soft spot for rescued animals. Her best lessons on writing came from a lifetime of reading. She loves the fantastical, and the magical, and believes a captivating romance can be the most realistic magic of all. Kelly, her husband and her two children share their Virginia home with three dogs who walk her, and two cats who permit her to occasionally share their couch.

Author links
Website / Goodreads / Facebook / Twitter
Excerpt
Jessa couldn't even begin to keep track of all the different emotions that were fighting to the surface at the thought of her mother. She was honored that Emariya wanted her to accompany her, but at the same time, she wasn't thrilled about leaving home. Even more, her mother's words before she departed were weighing heavily on her mind.
“Jessa, your job will not be an easy one. Looking after your mistress on this journey will be like nothing you've ever done.”
“Has looking after Emariya ever been easy, Mama?” Jessa had teased. It was no secret that her mother often complained of how headstrong Emariya tended to be.
They'd been in the kitchen packing up the last of the food they would be taking with them. “This will be different, Jessa. She will be in danger from much more than a few ruffled feathers over not observing proper formalities. Though you will need to see that she makes a good impression when you present her to the prince—may the Three give you the strength.” The heavily dimpled woman had looked to the heavens. “That won't be an easy task, either. But Jessa, listen up now. There are those who would happily see her not reach Thalmas, and they will look to stand in her way. What she is doing with this journey…well, there are those who have spoken of its possibility, and are determined to prevent it at all costs.” Her mother had looked her hard in the eye, stressing the importance of what she was saying.
“Spoken of it how?” Jessa was confused. Emariya had only decided to go to Thalmas a few days before. While she talked, she carefully wrapped slices of turkey before tucking them into the canvas pack lying on the table.
Ignoring her question, her mother continued, “She may well be able to finish what her mother started, but only if you can keep her safe.” Mairi had absentmindedly wiped her hands on her apron as she turned away from her daughter.
“What her mother started? I don't understand, Mama, what are you going on about?” Jessa was starting to worry. Would her mother be all right here without her? Jessa gently touched her mother's arm, turning her to face her again.
Mairi had sighed. “Lady Valencia came to Eltar because she had dreamt of a day when we might all prosper in peace. Emariya has the ability to bring that peace.”
“Mother, why haven't you ever mentioned this before? You've always been reluctant to speak of Lady Valencia,” Jessa asked, confused. She could tell that her mother felt that what she was saying was gravely important, so why didn't she just come out with it? Nothing she was saying made sense.
“Because she must find her own path, instead of walking the one she believes she was born to. Do not tell her what I have said, Jessa. Promise me.” Mairi's expression was serious.
“I promise, Mama.” Jessa patted her mother's arm, still concerned.
“She'll have Khane to keep her safe from physical harms—we can hope, at least. But she needs you as well. Her heart tends to run away with her wits. Not everyone you meet will be able to be trusted. It’s up to you to keep her eyes open, but more importantly, you must make sure she keeps her ears open. Jessa, listen to me now: you have got to keep her safe. I tried to keep her mother from harm, but I couldn't. I pray you have better luck than I did.” Her mother pulled her close in a tender embrace. “But oh, how I shall miss you, my girl.”
“I'll miss you too, Mama,” Jessa whispered, her heart catching in her throat.
Her mother had an uncanny way of being right, but Jessa couldn’t help hoping her mother had been overestimating the trials that lay ahead.