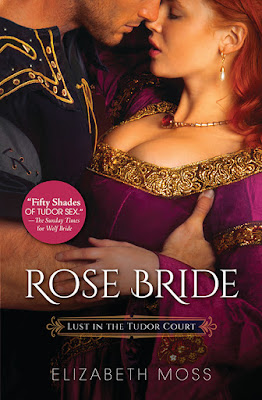 Margerie Croft yielded her virginity before her wedding night, and then fled King Henry VIII’s court, knowing she couldn’t marry a man she did not love. Now she is viewed as soiled goods, fit only for the role of a courtier's plaything.

Virgil Elton has heard the wicked rumors, but something about Margerie calls to him. Drawn close despite himself, he invites her to help in his work to restore the king’s flagging health. But as he comes to know her, Virgil discovers beneath the layers of protective reserve a woman who is as intelligent and passionate as she is beautiful. He will stop at nothing to heal the damage the court has inflicted, even if it means falling himself…

Born into a literary family, Elizabeth Moss is a keen countryside walker who writes fun and sexy historical romances. She also writes award-winning fiction as Victoria Lamb. She lives with her husband and five children in South-West England.


TIP FOR SURVIVING THE TUDOR PERIOD


DON’T BE A VAGABOND

Throughout the Tudor age, vagrancy is a serious problem in England. There is no welfare state, and no recourse if you lose the ability to earn a livelihood, including disabilities or injuries received fighting for your country. So whatever you do, don’t lose your job or the roof over your head. Then you’ll be considered homeless and what the law terms a ‘vagabond’, and rude children will run after you, singing, ‘Hark, hark! The dogs do bark!/The beggars are coming to town.’ By strict Tudor law, beggars are considered a social pest and should be whipped out of of the town limits – hence the well-known nursery rhyme. If caught wandering without any money on their persons, beggars can be arrested. So if you are unfortunate enough to lose your home, keep some spare change on you at all times, or you may end up whipped and imprisoned.

Virgil stopped, listening. Someone was coming along the shadowy corridor ahead. He could hear light footsteps, almost shuffling. Then a dim figure passed beneath the nearest torch and he saw her face, pale, her eyes open but devoid of expression, her lips parted in a string of barely coherent whispers.

It was Margerie Croft herself, wandering barefoot in her sleep, her unbound hair tumbling in a cloudy red cascade to her waist, clad in nothing but a thin white shift.

Fortuna audaces iuvat, he thought fiercely. Fortune favours the bold. And he would have to be bold if he wished to be favoured by this beautiful, elusive creature.

‘He will not touch me again. No, I shall not allow it,’ she was whispering to herself. ‘You must let me go, sir. You cannot keep me here forever.’

So her night wanderings were not at an end, as she had tried to pretend. And here was the proof.

Virgil stepped into her path and caught her by the shoulders. ‘Margerie,’ he said quietly, looking into her face.

But her clear green gaze looked past him, empty and seemingly unaware of her surroundings.

Virgil stood a moment, thinking, still holding her lightly. He had read of somnambulists in ancient texts, troubled souls who walked in their sleep, and had even prescribed a sleeping draught to keep her nightmares at bay. But he had not truly believed it to be possible until he had seen the phenomenon with his own eyes, thinking she and Kate Langley must have exaggerated her condition.

What was it that stirred her soul so deeply, she must wander the palace at night in this dreamlike state?

‘Are you awake, Margerie? Can you hear me?’ His whisper echoed in the narrow corridor. ‘Do you know where you are?’

She did not respond but stood passive and blank-faced, breathing more deeply now, as though fast asleep. His gaze dropped to her mouth, and a powerful surge of desire moved through his body, surprising him.

She was at once vulnerable and strong, her swaying curves generous, her height imposing, suggesting she was the equal of a man. In any other woman such fiery independence of spirit would have left him cool. Yet something about Margerie threw out a challenge to every male she passed – an instinctive lure as old as time, a dare that he found nigh impossible to resist – to tame and subdue her if he was up to the task. And Virgil knew he was.

But he wanted Margerie to be awake when he took her.

‘Margerie, I am going to kiss you,’ he warned her, but there was no flicker of response in that pale face.

Was she in truth asleep, or just feigning?

There was one way to find out. Grasping her shoulders, Virgil leant forward and set his lips to hers. The violent shock that ran through him as their mouths touched stole his ability to breathe, to think, to retain control over himself. She was still asleep. He should not be doing this, it was not right. Still he could not draw away.

His kiss deepened, and as her lips parted softly under that pressure, Virgil pushed his tongue inside and tasted her. That was his undoing.

She tasted like honey, and God’s blood, he was drowning in her. Drowning ...

Then suddenly Margerie was struggling in his arms, jerking away from him, gasping and shaking. Virgil let her go. He was not interested in forcing Margerie into an embrace she did not welcome.

Besides, her eyes held shocked awareness now. She was awake.