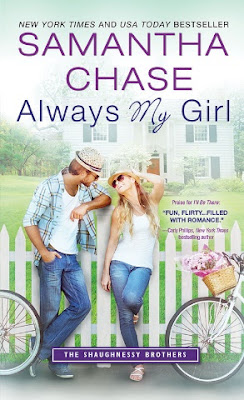 Sometimes the love that’s closest to you is the hardest to see.

Quinn Shaughnessy’s two older brothers have found their true loves … but Quinn’s not about to join that parade. Nope, as he tells his best friend Anna, there’s a lot more to life than getting tied down to one person. He’s positive tomboy Anna will be on his side — except she’s inexplicably developing other interests — even dating! Suddenly Quinn is seeing Anna in a very different light.

Quinn has been Anna’s buddy since they were both five years old. She can tell him anything — except the one big secret she’s been hiding for years — that she’s fallen in love with him. Now Anna is determined to make a life for herself that doesn’t include pining for Quinn. Falling in love with your best friend? Easy. Telling them how you really feel? Impossible.

One look at the massive beach house had Quinn Shaughnessy shaking his head. Why this wedding couldn’t just be a normal event—at a hotel—he couldn’t understand. It would be easier. It would be more practical.

And it would mean there was a bar on the premises for him to go to and get away from his family for a little while and maybe pick up an attractive woman.

Not that he didn’t love his family—he did. But three days with everyone back under one roof was a little more togetherness than he was in the mood for. No matter what the occasion.

Ever since moving out of the family home at eighteen and going to college, Quinn had never looked back. There were the occasional trips home for school breaks, when he was forced to go home and share a room with one of his brothers, but for the most part, he found excuses to stay other places. He enjoyed his space, his freedom, and he’d never felt the need to make excuses about it.

Being one of six kids in a four-bedroom house growing up had been less than a dream. When he went to college—even though he shared a room there with one other guy—living in the dorm felt different. No one was looking over his shoulder or trying to get him into trouble or trying to tell him what to do.

After graduation, he’d lived on his own while on the race-car circuit. When his career came to an end—sooner than he’d anticipated—Quinn still managed to land on his feet. And with a place of his own…rather than going home.

The large house loomed in front of him.

Aidan and Zoe were getting married this weekend, and because Zoe didn’t have any family left and Aidan was a private kind of guy, they’d opted for a small, intimate wedding. On the beach. With only the family and a few friends in attendance.

All under one roof.

He cursed under his breath and sighed. It was only one weekend. It was the chant he kept repeating in his brain as he climbed from the car and stretched. Why they had to choose a beach four hours from home when they lived at the beach in North Carolina was beyond him. And to make it worse, they’d chosen a location that wasn’t all that far from Hugh’s Hilton Head Island resort! They could all be in their own rooms at a luxury resort right now, having drinks served to them by the pool instead of this.

“Clearly, being in love makes you an idiot,” he muttered and opened the trunk to grab his luggage.

“You’ve been here less than five minutes and you’re already calling people idiots?” a voice said from behind him. Turning, he saw his brother—the groom—walking toward him with a big, sappy grin on his face.

Quinn straightened. “Not people, just you,” he teased.

“Aww…you say the sweetest things,” Aidan teased right back before grabbing Quinn in a bear hug. “Glad you made it.”

“You could have picked a place closer to home. Or Hugh’s place.”

Aidan shook his head. “The resort was beautiful and everything would have been taken care of, but Zoe and I aren’t like that. We wanted a place where—”

“You can be in control?” Quinn interjected with a laugh.

Aidan couldn’t help but laugh with him. “Something like that. Either way, the house is great—six bedrooms—and we snagged the place next door for the rest of the guests.”

“How many people are coming? I thought it was just us.”

“Makes sense. So who’s on the guest list? Any single friends of Zoe’s?” he asked with a lecherous eyebrow waggle.

“Keep your hands to yourself,” Aidan chided. “Three of her friends from Arizona are flying in for the weekend. They’ll get one of the bedrooms next door. Then Aunt Rose and Uncle Ryan will have one, Uncle John and Aunt JoAnn will have one, the Hannigans will be over there, and Bobby snagged the last bedroom. It’s a kiddie space and we’ve all gotten a good laugh at that one. Can’t wait for him to get here and see his reaction.”

“Man, that’s going to be good,” Quinn laughed. “So everyone else is over here? In this house?”

“What? What’s wrong with that?”

“Riley’s people didn’t want him traveling alone—he’s made the news lately with his plans to take an extended break from singing and the press is hounding him. They’re sending a bodyguard with him.”

“So the bodyguard gets my space in the room?”

Aidan nodded. “So you’ll be spooning with Dad.”

Quinn groaned even louder. “Oh, man, come on! Why me?”

“Because you’ve always bitched about sharing a room with the twins. Your entire life! So I figured you and Dad would be a better fit. It’s only a couple of nights. You can handle it.”

Turning, Quinn picked up his suitcase and slammed the trunk shut. “Screw you. This sucks. Please tell me there’s at least some beer in the fridge.”

Aidan nodded. “Go around back. Zoe’s out by the pool, and she’ll give you the grand tour and show you your room—and where the beer is.”

“Where are you going?”

“I’m picking up Riley, Owen, and the bodyguard from the airport. They’re landing at one of the smaller ones to try and avoid some of the drama and bypass the press.”

Aidan shook his head. “It’s going to be tight in my car as it is and I have no idea what kind of luggage any of them are bringing. You hang out here and get settled in. Hugh and Aubrey should be arriving in about an hour, and Dad and Darcy shouldn’t be too far behind.”

“Fine,” Quinn grumbled. “I’ll stay and be the welcoming committee. Thanks.”

“It’s that sparkling personality of yours that helped make the decision.” He gave Quinn a friendly pat on the back. “Keep on smiling, sunshine.”

Quinn cursed a little more colorfully this time and gave his brother the one-finger salute before turning and heading for the house.

“If this whole situation didn’t suck before, it certainly does now.” He stepped away from his car and made his way toward the gate on the side of the house. Aidan said he’d find Zoe back there. Maybe he could convince her to give him a sofa to sleep on rather than sharing a room with his dad.

It held little to no appeal.

Okay, fine, he’d share the room with his father and smile when he was supposed to and be nice to people. It was only three days and there were going to be three single, out-of-town girls here for him to entertain.

Maybe it wasn’t going to be such a bad weekend after all.

Samantha Chase released her debut novel, Jordan’s Return, in November 2011. Since then, she has published seventeen more titles and has become a New York Times and USA Today bestselling author. She lives with her husband of twenty-four years and their two sons in Wake Forest, North Carolina.