**SPOTLIGHT, EXCERPT & GIVEAWAY** A Gift For Guile by Alissa Johnson 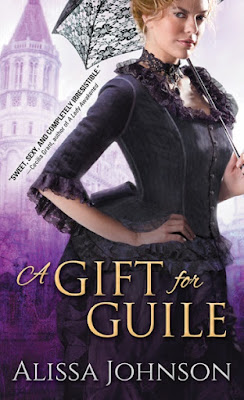 And God help him, but he'll do anything to keep her safe.

Beautiful and conniving, maddening and brilliant, Esther is everything private detective Samuel Brass shouldn't want. Esther knows she's put herself in terrible danger, but nothing will stop her from making amends—not her family's enemies, not old fears, and certainly not the domineering, interfering, and undeniably handsome former officer of the Scotland Yard. Yet whenever he's near, Samuel makes her long for a life that can never be hers…and wish she were worthy of being saved.


Second in an exciting late Victorian romance series from a RITA Award nominee!


Fun Fact about the Victorian Age

Victorians had a taste for invention. In 1851, The Great Exhibition opened its doors in London. Showcasing everything from the Bell telegraph to the latest in corset design, the exhibition drew more than six millions visitors in the six short months of its existence. With rapid advances being made in science and technology—not to mention a nearly complete lack of government oversight—it’s no wonder Victorian men and women dreamed, planned, and experimented their way to all sorts of inventions, including quite a few we still use today, like rubber tires, light bulbs, pasteurization, and steel. And, naturally, they came up with a few clunkers as well, such as the, no doubt well-intentioned, but ultimately unsuccessful, “anti-garroting cravat.”


Samuel grabbed Esther and shoved her behind him just as the gig raced by, launching a great wall of ditch water over the curb and onto him.

It soaked him through to the skin, and there was nothing he could do but drag a hand down his face and flick the excess moisture from his fingers.

Esther snickered. Actually, she coughed, but it was a hide-the-snicker sort of cough. It didn’t fool anyone.

He glowered at her.

“Get in the carriage, Esther.”

For once, she complied without argument. She clambered inside, one hand covering her mouth. The moment the door was closed, her laughter filled the carriage.

“Oh. Oh, Lord.” She flipped up her veil. “I’m sorry. I’m terribly sorry. But the state of you. Good heavens.” She calmed herself a bit and reached over to pat his knee. “My hero.”

Then she laughed some more.

He ought to be offended, really. Annoyed at the very least. But he couldn’t seem to move beyond amazed.

He’d never heard her laugh before. Not like this. Not with her head tipped back and the sound just flowing from her.

Samuel wracked his brain for a single memory of Esther laughing, really laughing, and came up blank. Years ago, when she’d been little more than a girl, she had giggled. Once or twice, she may have chuckled. Certainly, he’d heard her snicker. But he hadn’t heard her laugh. Not as a child, and not since he’d known her as an adult.

The woman simply didn’t laugh in front of him.

It seemed an odd thing not to have noticed before now. Stranger still that he should find an ordinary sound so extraordinarily appealing. There was a sweet, clear tone to it that made him think of wind chimes. Not the tinny sort Mrs. Lanchor had hung in the garden two years ago (and the beast had mauled into oblivion three days ago) but the solid sort that put one to mind of woodwinds.

“You’ve changed,” he murmured. There used to be a brittleness about her, a deep unhappiness she kept hidden away along with her kindness and honesty, all buried beneath a layer of cool indifference. He couldn’t see that brittleness anymore.

“Beg your pardon?” Her laugh tapered off slowly, and she looked at him uncertainly. “I didn’t mean to cause offense.” A spark of mischievousness lit in her blue eyes. “Well, maybe a little offense, but—”

“I’m not offended… Maybe a little offended,” he corrected with humor. “But I wasn’t implying that you’ve changed for the worse. It’s for the better.”

“Oh.” Her lips curved in a small, hesitant smile. “Thank you.”

“I am,” she agreed, and so readily that he could only assume she’d given the matter some thought recently. “I am starting to be.”

“It is nice to see.” It was more than nice. It was something else, something more.

Here, he thought, was the woman he’d caught glimpses of before. The remarkable one who amazed and fascinated him. Only it wasn’t just a glimpse. He remembered her insistence that he wasn’t a hard man and her defense of the little boy. And he wondered now if the traits he admired in her had never been quite as buried or transient as he imagined. Anything could seem like a glimpse, he realized, if one looked away too quickly.