**SPOTLIGHT, EXCERPT & GIVEAWAY** If the Earl Only Knew by Amanda Forester 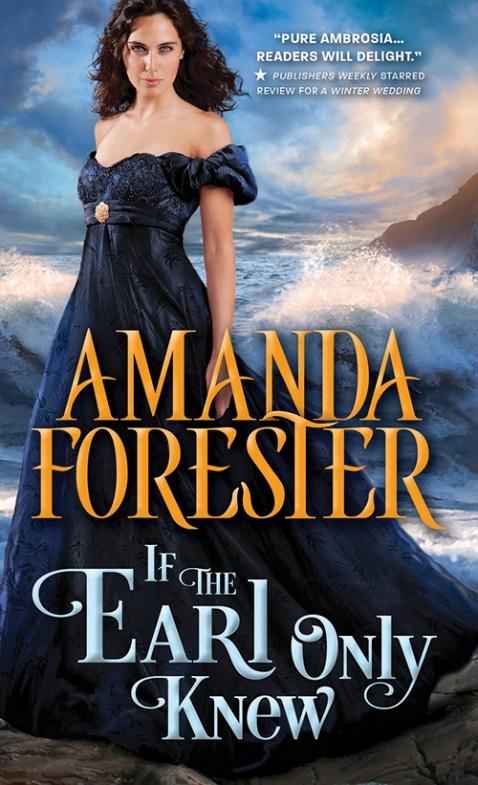 
The chase is on in award-winning author Amanda Forester’s brand-new Regency romance series!

Orphaned at a young age, Lady Katherine Ashton and her brother have spent most of their lives on the high seas, seeking to restore their family fortune through somewhat dubious means. After that kind of adventure, Kate knows she won’t ever be accepted as a proper society lady.

To the annoyingly clever, temptingly handsome, and altogether troublesome Earl of Wynbrook, society ladies are a dead bore. Kate, on the other hand, is scandalous, alluring, and altogether fascinating. And Kate can’t decide which she relishes more, the thrill of chasing fearsome pirates, or having Wynbrook chase after her…


In three words, how would you describe If the Earl Only Knew?


“Are you ready for this?” asked her brother, pulling on his worn wool greatcoat.

“Quite.” Lady Kate chose to misinterpret his meaning. “I have prepared an accounting for each one of our investors, providing details of their original investment and return.”

Robert Ashton, Earl of Darington, took the large ledgers from her hands. “Not what I meant.”

“I shall never be ready. But let us do it anyway,” she said crisply. She had developed a keen accounting for each one of their investors, but such a meeting brought the prospect of seeing one particular investor. A man she never wanted to see again.

Would he be there? Would he dare come?

Lady Katherine has no beauty, no fashion, no conversation, and no accomplishments save being the sister to an earl, and an impoverished one at that. Years later, his voice still rang in her head.

It had begun innocently enough. While at university, Robert had become acquainted with Tristan Arlington, the second son of the Earl of Wynbrook, who had invited them to spend the Christmas holidays with his family. Tristan’s mother had been particularly kind, and for a brief moment Kate had thought she had finally been accepted. But it was not to last.

Kate closed her eyes and remembered her fateful visit. She had heard voices coming from the open library door and stopped. She knew she ought not to eavesdrop, but she could not help pausing outside the door and listening to the conversation between Tristan and his elder brother.

“Darington might not be so bad—one can forgive lack of conversation in a gentleman—but you must admit the sister is poor company indeed,” drawled Tristan’s elder brother.

“Dash it, John! What a gudgeon you are,” exclaimed Tristan. “Kate’s not had the advantages of feminine company is all. Their mother died bringing them into the world.”

“Perhaps, but is that any reason for Mother to sponsor her coming out with Jane this spring?”

“Why should Mother not bring out Kate with our sister?” cried Tristan. “Quite kind of her.”

“Because it may prove an embarrassment to Mother. I do not mean to offend, but your friend’s earldom was only recently created. Darington’s father must have done something quite heroic in his naval career to rise from a baronet to an earl. You know how society disdains social climbers.”

Six years later, the words still ground like grit in her teeth. How she had hated him!

They came to a stop with a jolt and Kate opened her eyes to the intimidating sight of rising colonnades of the Bank of London. Her pulse pounded in her temples as they were led to a sitting room designed for meetings of the rich and the even richer. Dark mahogany paneling lined the hall, and all the furnishings from the curtains to the chairs were resplendent in rich jewel tones. Everything around her spoke of wealth and power.

Surely he would not be here. He would send his solicitor, not come in person. There was no need. She had almost convinced herself of his certain absence when they entered the room.

The bastion of society stood warming himself by the fire, dressed impeccably in a dark blue, double-breasted suit that was tailored to perfection. She could not help but drink in his form. His broad, square shoulders revealed a powerful build, yet he had a trim waist and muscular thighs that were on the edge of indecent in his skintight buckskin breeches. With his chestnut hair, green eyes, and square jaw he was the very definition of a handsome man.

John Arlington, the Earl of Wynbrook.

The only man she had ever kissed.

Amanda Forester holds a PhD in psychology and worked many years in academia before discovering that writing historical romance was way more fun. A Publishers Weekly Top Ten author, her books have been given starred reviews from Booklist, Publishers Weekly, and a Top Pick from RT Book Reviews. Whether in the rugged Highlands of medieval Scotland or the decadent ballrooms of Regency England, her novels offer fast-paced adventures filled with wit, intrigue, and romance. You can visit her at www.amandaforester.com.