**SPOTLIGHT, EXCERPT & GIVEAWAY** No One But You by Leigh Greenwood 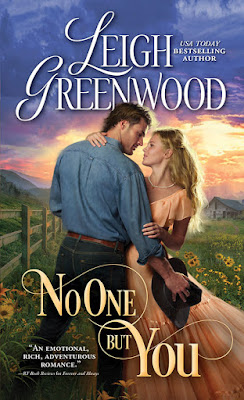 Alone in the world and struggling to make ends meet, Texas war widow Sarah Winborne will do anything to keep her two small children safe and her hard-won ranch from going under. She hasn’t fought for so long to lose everything… and if that means marrying a stranger to protect her family’s future, then so be it.

She never expected anything but a business arrangement, but something about Benton Wheeler’s broad shoulders and kind eyes awakens emotions she’d long since buried. He makes her feel beautiful. He makes her feel desired. He makes her feel like a woman again. And even though their marriage was never intended to be more than a matter of convenience, as Benton stands between her small family and the wild and dangerous West, Sarah may just realize that the cowboy she married is the love she never dreamed she would find…

The question punctured her thoughts. The unexpectedness of it was like a physical blow. “Of course I do. I wouldn’t have married him if I hadn’t.”

“You said you only married because you had to.”

“Yes, but I wouldn’t have married a man I didn’t like or didn’t trust.”

Jared had finished setting the table and putting out the bowls for the food, but he hadn’t put out the glasses. “Do you want him to stay after he fixes things so we won’t starve? He said he couldn’t get the land until you divorce him.”

Sarah didn’t know what had prompted Jared to ask these questions. She had always tried to be forthcoming with the children, but maybe she’d told them too much. “That’s a long way in the future.”

“Would you let him stay if he wants to?”

Sarah dragged her attention back to the stove. She moved the potatoes off the heat and checked the bottom of the cornbread to make sure it hadn’t burned. “Why are you asking this?”

“Because I want Salty to stay. Forever.”

Sarah forgot her potatoes and cornbread. She looked at her son. “Do you like him that much already?”

“I wish he could be my papa. Arnie said he wanted to be my papa, but I didn’t want him. I want Salty.”

Sarah pulled her son close and gave him a swift hug. “Honey, I know how important your crutch is to you, but anybody could have made you one.”

And Salty had indeed made one, had made it a priority despite staying up all night. He’d taken them to eat in a restaurant, bought them a dog, and let them stay in a hotel. No wonder Jared wanted him to stay.

“He might decide to sell his land once he gets it,” she cautioned.

“He won’t.” It wasn’t a question. It wasn’t even an opinion. Jared spoke as though his belief were an established fact.

“Why do you think that?”

And that apparently settled the question for Jared, because he started setting out glasses.

Sarah hadn’t let herself think about what Salty might do when it came time to sign over half of the ranch; not lately. He had become part of her plans nearly as quickly as he had done for Jared. She was more attracted to him than ever. But that’s not what worried her. She liked him. That wasn’t in her plans.

She’d been on edge so long she probably wasn’t thinking clearly. She was simply grateful to find someone who might actually solve her problems. As a result, she had started thinking she’d like him to stay around forever. But was she so grateful, so relieved, she’d forgotten what her father was like, or Roger? Had she forgotten the men who’d worked for her, who were more interested in getting into her bed than in doing the work they were paid to do? Rose Randolph might have found a man she could love in a fairy-tale way, but Sarah didn’t trust any man that much.

But, maybe she could take him as a lover?

The thought shocked her so much she nearly dropped the pan of cornbread she was taking off the stove. She’d never had such a thought in her life. What was wrong with her? But the thought of being held and kissed by Salty caused her temperature to rise. Something deep inside her longed for the physical contact, and it wasn’t just a sense of safety she might find in his arms. She sought something much more fundamental, something she hadn’t felt with Roger or any other man. It was as though she needed him. She could understand want, could even understand lust, but where had need come from? It wasn’t physical. She could take care of herself. It was an emotional need, one she’d never been able to fulfill, only deny.

“Hurry up with the cornbread, Mama. Ellen and Salty are almost here.”

Sarah’s impulse was to run to her bedroom. How could she face Salty with her thoughts in such disarray? She stood frozen while the pair entered the house. Then she did something she’d never done before. She fainted.
Leigh Greenwood is the USA Today bestselling author of the popular Seven Brides, Cowboys, and Night Riders series. The proud father of three grown children, Leigh resides in Charlotte, North Carolina. He never intended to be a writer, but he found it hard to ignore the people in his head, and the only way to get them out was to write. Visit him at www.leigh-greenwood.com.

Email ThisBlogThis!Share to TwitterShare to FacebookShare to Pinterest
Labels: Excerpt, giveaway, Leigh Greenwood, No One But You, Sassy Book lovers, sourcebooks casablanca, Spotlight