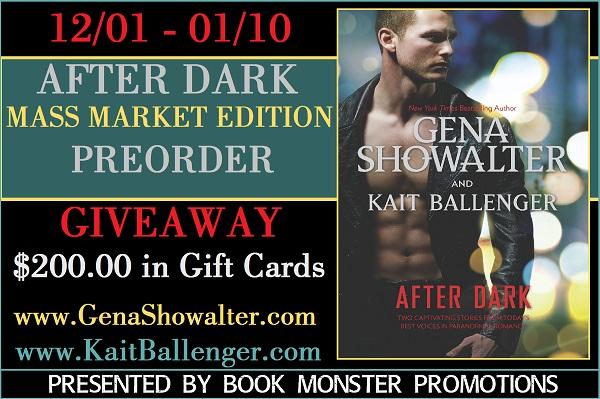 The AFTER DARK Anthology featuring Gena Showalter's The Darkest Angel and Kait Ballenger's Shadow Hunter is being released in mass market paperback on December 31 and to celebrate we are giving away lots of goodies.

ENTRY RULES:
PLEASE BE SURE TO READ ENTRY RULES COMPLETELY!

In order to enter, you must email a picture, screen shot or attach a copy of your receipt from your purchase of either the MASS MARKET PAPERBACK or MASS MARKET EBOOK version of After Dark.

PLEASE NOTE: It MUST be the MASS MARKET format to be eligible for the giveaway.

Email your receipts to kaitballengergiveaway@gmail.com

FIRST 10 ENTRANTS:
will receive a giant SWAG pack that contains a signed bookplate plus bookmarks from Gena along with SWAG from 50+ authors, courtesy of Book Monster Promotions.

FIRST 50 ENTRANTS:
will receive a goodie bag from Kait that includes bookmarks, magnets, pens and other goodies.

FIRST 500 ENTRANTS:
will receive the first chapter of Immortal Hunter, Book #2 in Kait's Execution Underground series for an exclusive peek.

You have until 1/10/14 to purchase your Mass Market edition and submit your receipt. Winners will be announced by 1/15/14. 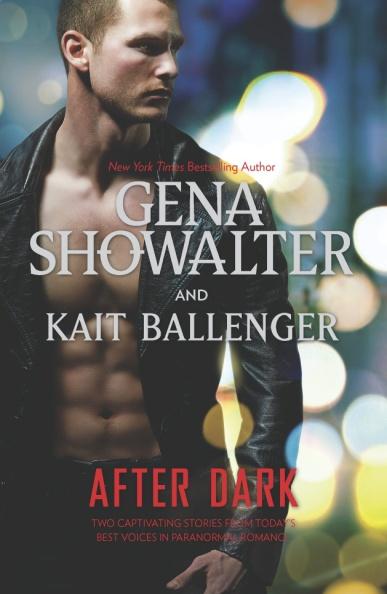 A Timeless SeductionA Unique TemptationAnd a Whole World of Dark Desires…From New York Times bestselling author Gena Showalter….The Darkest AngelWinged warrior Lysander has been alive for centuries, and yet he's never known desire—until he meets Bianka. Spawned from the bloodline of his enemy, the beautiful but deadly Harpy is determined to lead the untouched Lysander into temptation. He may try to evade her attempts, but even the most iron-willed demon assassin can resist for only so long….And from debut author Kait Ballenger….Shadow HunterVampire hunter Damon Brock's newest assignment with the Execution Underground is Rochester, New York, a city crawling with the undead. But he isn't the only hunter in town gunning for vamp blood. Tiffany Solow is fierce and ruthless when it comes to slaying the monsters that destroyed her family—and she works solo. But being alone is no longer an option when she meets the mysterious hunter who wants more than just her turf. Forced to unite against the local covens, the line between good and evil blurs when they must decide between their lifelong beliefs…and their newfound desires.