TOUR SCHEDULE
Welcome we're one of the first stops (other stop today is over with Fantasy Book Worlds) on the CAPTIVATE blog tour.
So, to start off we have more info about the book, a special Guest post by the amazing Vanessa Garden, my review and an awesome giveaway. How does that sound? Well, lets get to it!! ^_^


But first.... just look at that gorgeous cover, doesn't it just draw you right in? Believe me, whats inside is even better! (My review is below)
Captivate
By Vanessa Garden
Release date: 1st January 2014
Published by: HarlequinTeen Australia 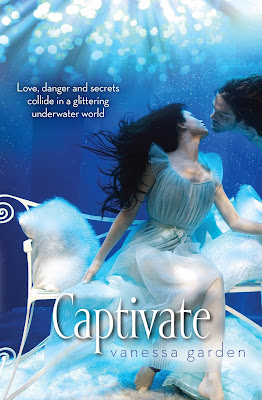 In a glittering underwater world, nothing is as it seems...

For the past twelve months since her parents’ death, seventeen-year-old Miranda Sun has harboured a dark secret — a secret that has strained the close relationship she once shared with her older sister, Lauren. In an effort to repair this broken bond, Miranda’s grandparents whisk the siblings away on a secluded beach holiday. Except before Miranda gets a chance to confess her life-changing secret, she’s dragged underwater by a mysterious stranger while taking a midnight swim.

Nineteen-year-old Marko intends to marry Miranda in order to keep his crown from falling into the sinister clutches of his half-brother, Damir. There’s only one problem. Miranda is desperate to return home to right things with her sister and she wants nothing to do with Marko. Trying to secure her freedom, Miranda quickly forms an alliance with Robbie — Marko’s personal guard. However, she soon discovers that even underwater, people are hiding dangerous secrets... 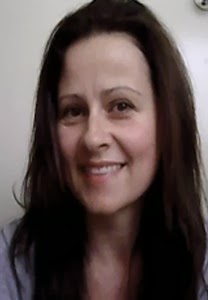 Vanessa Garden lives on the coast of Western Australia with her husband, their three chatty children, and three calming goldfish. When she is not writing, Vanessa can be found at the local bookstore where she works part-time. Being a bookseller as well as an author, Vanessa loves nothing more than immersing herself in the exciting world of books. When she is not gushing about her favourite reads to customers, or dreaming up her next novel, she enjoys spending time with the people she loves most.

3 things I love about being a writer:

Getting to do things vicariously through my character, things I’d never get to do in real life – like wielding jewel-encrusted daggers, kissing sexy kings and living in a glittering underwater city

Being able to work in my pyjamas

Having a good excuse for my sometimes messy house

3 ways I make time to write:

I try to ignore the TV

3 books that made me want to become a writer:

3 challenges I faced writing my novel:

Sticking to the storyline – my characters kept going off on a tangent and I had to reel them in so as not to have so many plot-lines streaming through the book.

Finding the time to write while looking after my three children

A song, ‘To You I Bestow’ by an Irish singer named Mundy. It inspired a gorgeous and romantic scene which then grew into the book.

Jonathan Rhys Meyers – I came across a picture of him on the internet and it was like Marko had jumped out of my mind and onto the screen. He is exactly how I pictured him. As a result I’ve watched nearly everything he has acted in. He is amazing.

Miranda, Marko and Robbie (of course)

3 things I love about these characters:

Miranda – I love her because she is a normal teenage girl, full of faults and insecurities, dreams and hopes. I like to think she is someone we can all relate to.

Marko – He is fiercely loyal and devoted to those that he loves and he likes to find the best in others. He has a lot of secrets and rarely shares them. He doesn’t fall in love easily, but when he does, he falls hard. Oh, and he is very easy on the eye, especially when dressed in black and sporting knee-high boots with daggers strapped to them.

Robbie – Robbie puts protecting Marko, his best friend and king, before his own wants and needs. Though well-built and highly trained in combat, he is a sensitive soul who keeps a journal and believes in the idea of soul-mates.
3 characters I love to hate (but could never truly hate) in Captivate

Sylvia, Marko’s sister (but she is so much fun to write)

Dina, the Head Chef in the castle kitchens

3 facts about the underwater city, Marin

It is a domed city, encased in light-crystal – Marin’s energy source.

Its origins are still being investigated by Marko and the people of Marin. Marko’s theory includes extra-terrestrial beings and mother-ships.

Corporal punishment in Marin involves being thrown into The Colosseum – an arena sized tank filled with water and Great White sharks!

I only just finished Captive a short while ago and everything is still swirling around in my brain. Not sure where to start lol...
Ok, well firstly the cover, well I'm sure we can all agree it's absolutely stunning! The story that lies within matches the cover to a T, which is awesome! This story was a different experience for me, from all the books I've read not alot revolve around the sea, especially an underwater city. An underwater city, could you even imagine it? ^_^
Now to the story.... Miranda was out swimming with her sister, when she found herself being pulled under the water. When she awoke, she was in a strange bed and in a fancy room surrounded with mermaid pictures. She'd been kidnapped and taken to an underwater city called, Marin. Where she was expected to marry the King and bare his child to save the city. This King happens to be a scary, yet very handsome man.
Despite Miranda's circumstances she finds herself developing feelings for this certain King, as feelings started to grow, danger reared it's ugly head and Miranda's life was being threatened. The Kings half-brother, Damir, was determined to do everything he could to overtake the throne. He had spies everywhere, a few lurking through the castle watching their every move.
Robbie, Miranda's capture. He was completely consumed with guilt over what he'd done. He has half fighting to stay true to his King, his best friend. While the other half wishes nothing but to help Miranda escape back home to her family.
The characters are easy to form connections with, I enjoyed being along this adventure with them. With such a gripping storyline, you'll find yourself compelled to come back for more. This is definitely one underwater world worth discovering, I feel there is more to come here, Miranda's story isn't over yet. -_^
~ ~ ~ ~ ~ ~ ~ ~ ~ ~ ~ ~ ~~ ~ ~ ~ ~ ~ ~ ~ ~ ~
GIVEAWAY

We have an awesome giveaway for you all today. 2 lucky winners will get a copy of CAPTIVATE!
So, up for grabs is an Ecopy of CAPTIVATE for our INTERNATIONAL peeps.
And a print copy for AUS & NZ only.
Due to this being for two different copies, we'll be having two rafflecopter forms. One will be for our international peeps (for the ecopy) and one will be for our AUS & NZ peeps (for the paperback copy). So, when entering please make sure you're using the correct form.
Thanks and GOOD LUCK TO YOU ALL!!! ^_^