Hot in the City by Jules Court Blog Tour PLUS Giveaway! 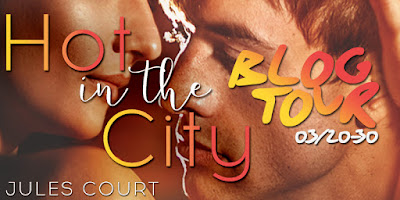 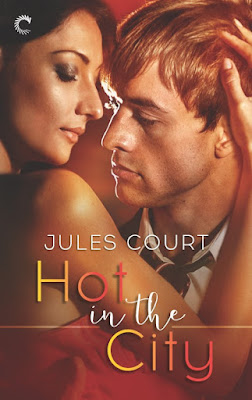 About Hot in the City by Jules Court


About:
The first time Detective Brian MacGregor met Priya Shah, he was bleeding. Injured apprehending a suspect, he just needed a few stitches. He didn't expect to feel a gut punch of lust for the beautiful ER doc. But another emergency called her away before he had a chance to ask her out…or kiss her. Or find out if she shared his sudden sex-in-a-dark-hospital-room fantasy.
The second time he met Priya, she was protecting a murder witness.
Protecting is putting it strongly, if you ask Priya. Her cousin may have witnessed a murder, but she had nothing to do with it. Even if the hot ginger cop seems like the perfect solution to Priya's summer dry spell, they both have more important things to worry about. Like finding Sara before the murderer does.
As far as Brian's concerned, Priya is the key—her cousin is bound to come back to her eventually, and when she does, he'll be there. They just need to keep their hands off each other until then. But when attraction burns this hot, it's only so long before someone has to break…


Meet Brian MacGregor, Hero of Hot in the City

In Hot in the City, a detective is searching for the witness to a gangland murder. When his best lead turns out to be the pretty ER doc who sewed him up after an encounter with a knife-wielding perp, he’s going to need all his control to keep his hands off her.

Brian MacGregor’s the hottest ginger since grownup Prince Harry. He loves the Red Sox, ice-cold beer, his bratty niece—enough to play superheroes with her even if she always makes him be the useless guy with the arrows, and being a cop. He busted his ass to make detective by age thirty and there’s no way he’s going to screw it up. Not even for the sexy doc he’s dying to touch, who just happens to be the key to finding his missing witness.

Detective MacGregor pulled out
a business card. He plucked a pen from the cup sitting on the bar, scribbled on
the back of the card and held it out to her. “This has my cell number on the
he is. It’s imperative that I talk to her.”
back. Call me immediately if you hear from your cousin or if you know where
s

She took it, careful not brush fingers with him. The universe hadn’t been sending her a gift, but rather a reminder, in placing him back in her path. “What’s this about?” she asked.
“Just tell her to call me.” He turned away to leave but hesitated before turning back to face her. “It was good to see you again, Priya,” he said. The smile transformed his face.
He walked away like a man with purpose, head high and broad shoulders back. Unfortunately that purpose was probably to arrest her cousin.
She crushed the business card in her palm. “Universe, why do you have to be such a dick?” she muttered. She pushed her half-eaten basket of fries away.

"I'm an East Coast native transplanted to the Pacific Northwest. I like movies with kissing and movies with things that go boom, books with heroines who are 100% done with your crap, dogs and cats living together, and enough sugar in my coffee to make the spoon stand up.
I write romance books with a little bit of heat and a lot of heart. My latest is the "Hot in the City" series, three contemporary romance novellas set in Boston."

a Rafflecopter giveaway
Posted by Renee Booth at 2:50 AM