A Spotlight on Saving Mercy by Abbie Roads PLUS Giveaway 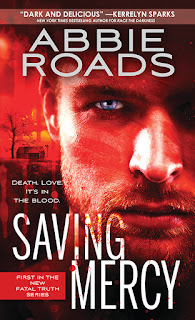 Cain Killion knows himself to be a damaged man, his only saving grace the extrasensory connection to blood that he uses to catch murderers. His latest case takes a macabre turn when he discovers a familiar and haunting symbol linking the crime to his own horrific past—and only one woman could know what it means.

Only to lose her to a nightmare

Mercy Ledger is brave, resilient, beautiful—and in terrible danger. The moment he sees Mercy, Cain knows he’s the one who can save her. He also knows he’s beyond redemption. But the lines between good and evil blur and the only thing clear to Cain and Mercy is that they belong together. Love is the antidote for blood—but is their bond strong enough to overcome the evil that stalks them?

Abbie Roads is a mental health counselor known for her blunt, honest style of therapy. By night she writes dark emotional novels, always giving her characters the happy ending she wishes for all her clients. Her novels have finaled in RWA contest, including the Golden Heart. She lives with her family in Marion, OH. 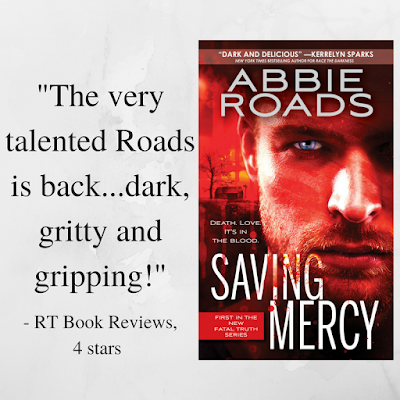 He pitched away from her, moving toward an open doorway. He shut the door behind him with a barely audible click. She tiptoed toward the door and pressed her ear against it listening. The sound of water hitting tile came to her. A shower. He was going to wash all the blood off. Totally understood how that could be a priority even with a migraine.

She turned and faced the darkened room. Her eyes had begun to adjust to the dimness and she could make out the shape of a king sized bed beneath a large window covered with blackout curtains. Across the room, there appeared to be another doorway. She headed in that direction, found a light switch just outside the door and flipped it on.

The light seemed garish and overly bright after the darkness of the room. Then she realized she was staring into Cain’s walk-in closet.

One way to get to know someone was to look inside their closet. The space was way larger than the amount of clothing in it. Boots and tennis shoes and some dress shoes were lined up in a neat row under a shelf. A few dress shirts hung on hangers, alongside a few pairs of dress pants. But mostly his clothes were stacked in neat bins. One bin held workout pants, one T-shirts, one sweatshirts, one jeans, and others held socks and underwear.

She reached in the bin and nabbed a pair of black boxer briefs. An image floated into her mind of him wearing them. And then another—better—image of him not wearing them. Her heart pumped a stream of longing through her entire body. Now was not the time to be thinking about jumping his bones.

She snagged a pair of sleep pants and a T-Shirt and dashed out of the closet, flipping the light switch behind her. Blackness swallowed everything, blinding her. Ahead of her she heard, the bathroom door open and she could barely make out the shape of him walking into the bedroom. It was too dark to make out any details, but shape was all she needed.

His shoulders were so broad, his waist so trim. Her gaze shifted downward, locking on that place she shouldn’t be looking. She squinted trying to see in the dark. Too bad she didn’t have a pair of those night vision goggles. Damn. Was he wearing a towel?

“Clothes.” She thrust out the pants to him. He took them and then put them on while she tried and tried to see through the dark. He walked over to the bed, drew back the covers, and laid down. He turned his back to her and sighed a breathy sound of pain and sorrow.

That was enough to knock her out of horny-land. She pulled her filthy shirt over her head, and put on the clean T-shirt she still held, then let the sleep pants she’d put on ages ago fall down to her ankles. She needed a shower, but he needed her more—whether he’d admit it or not.

She padded to the other side of the bed and slipped under the covers, facing him.

“No. Don’t.” His tone that of a petulant child—arguing just to argue.

She scooted closer, slipping her arm underneath his neck and pressed herself in to his body. He smelled clean and warm and safe. And even though she was in his bed to offer him comfort, her body eased, relaxing more than she had in years.

His body was rigid with tension—he was two seconds from pulling away. “Shh… Just let me hold you.” She ran her hand through his hair. Felt the dampness of it on her fingers.

As if the balloon of his tension popped, all the hardness in him turned to softness and he melted against her, shifting to find his place of comfort. He nestled his head on her shoulder, his arm around her waist, pulling her tighter in to his body. And it felt so right. So natural to be like this with him—as if they truly were meant for each other.

Part of her knew they were. No one else could ever understand her the way he did. And he needed her to show him he wasn’t a monster, but a beautiful soul who’d survived some bad shit.

Tonight she’d lie here with him, soaking in the sensation of his arms holding her tight, of his warm breath fanning across her chest, of holding him just as tight as he held her, of feeling at home for the first time in her life.

A tear slipped out of her eye and tickled its way down her cheek because tomorrow she would leave.