Hunter by Angela Fristoe PLUS Giveaway! 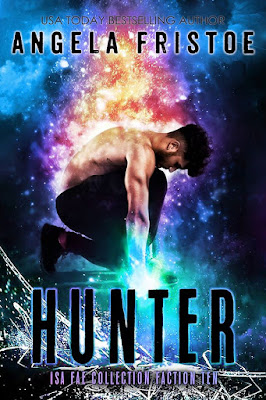 Duty was all that mattered. Until he met her. Thora has known only life on one side of the fence, sheltered in a village of half-breeds, free of the magic the witches and Fae crave. Yet, past the fence, the woods tempt her to discover what lies beyond the village. Nothing prepared her for what she’d find on the other side. As a descendant to the Fae Queen Tatiana, Garrett has devoted his life to protecting the breeds. When he finds Thora in the woods, he promises her a new life in the Council run Sanctuary, safe from those who would abuse her. But the Sanctuary holds dark secrets, and the haven Garrett promised is far more dangerous than the woods. As they work to unravel the deception of the Council, passion and duty collide, threatening the very lives Garrett swore to protect. Garrett knew sacrifices would need to be made, he just never realized it could be the woman he’s claimed as his.

She thought going to the Sanctuary was what she wanted, what would make her happy, but in the woods she had Garrett. Once she left...she didn't know what was out there for her. The trees rustled, their leaves tickling the sides of the shield. Were they closing in? Did they know how badly she just wanted to stay here? The touch of Garrett's fingers against her arm caused her to jump, and she turned to him. He knew. His hand slid into the hair at her nape, cupping her head, and he lowered his eyes until they were level with hers. The intensity burning in them caused a delicious shiver to run through her. "We need to do this, Thora," he said, his voice low and calm. "The woods wait for no one." She didn't think she could explain this to him. He was all she knew. All she had left. Would he even understand the fear that coursed through her at the thought of him leaving her? "I don't -" The sudden press of his lips ended her hesitant words. He consumed her senses, and every thought she had evaporated as her eyes drifted shut and she pressed into him. His tongue slipped into her mouth and caressed hers, teasing her with the taste of him. He pulled back, and she groaned in frustration as yet again she was left wanting more of him. Desire had been such a remote concept for her. She'd seen it shared between the couples in the village, even between her parents, but she'd never experienced passion until Garrett. Now that she had, she was reluctant to dismiss it so easily. He untangled his hand from her hair and then locked his fingers with hers. Her eyes fluttered open, and she stared up at him. "We go now," he said and pulled her along with him through the barrier. Still reeling from his kiss, Thora followed him. The trees had shifted since she woke. Tightening ever so slightly, like her hesitation to leave had stirred them again. An unsettled feeling of suspicion dispelled the excitement Garrett's kiss roused in her. "Garrett? Why did you kiss me?" He didn't answer, just wove her through the trees and bushes toward the edge. They were only a few yards away, yet each step they took brought them no closer. Finally, Garrett stopped, and she rammed into his back. He twisted around to look down at her, and she gave him a nervous smile. "I kissed you because I wanted to. Because I don't want you to worry about the future. I won't let anything happen to you, Thora." He stroked his thumb in soothing circles along the back of her hand. "There is no place safer for you than the Sanctuary." "Promise?" The corners of his lips tipped up. "I promise."

Angela Fristoe grew up in Alberta, Canada. She dreamed of becoming the next Dian Fossey or Jane Goodall until she realized she wasn't all that keen on the outdoors or animals. Instead, she went into education and focused on helping struggling readers. Angela lives on Vancouver Island with her family, where she is pursuing her writing career while continuing her work in the education field.

To celebrate the release of Hunter, Angela is giving away a $20 Amazon gift card. For your chance to win, simply enter via the Rafflecopter below. The contest closes at midnight EST on June 24, 2017, and is open to entrants worldwide. Good luck!